Let me get one thing straight, United don’t do moral victories. We leave that to big time and small minded clubs like City and tonights opponents, Chelsea. If however United have to lose a match, then the fashion it was lost in tonight is perfectly acceptable to me. It’s obviously disapointing to be knocked out when literally seconds away from winning but find me anybody who would swop Sundays result for tonights outcome. 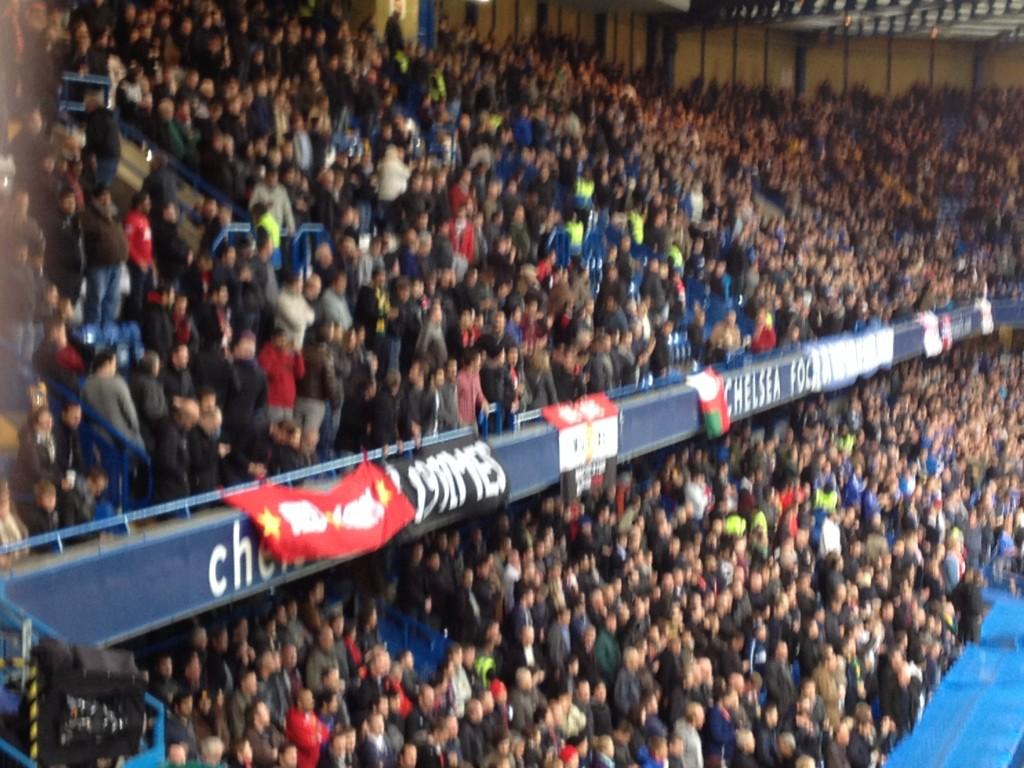 United fans in both tiers of the Shed (Photo courtesy of Daniel Burdett  http://thefaithfulmufc.com/author/luzhniki2008/ ) END_OF_DOCUMENT_TOKEN_TO_BE_REPLACED

Former landlord of The Park in Altrincham and 1960s United midfield legend Paddy Crerand said tonight in his programme column that it would be good for United to have qualification from this group wrapped up as soon as possible. Whilst that may be obvious he pointed out that Uniteds last game in the group stage is a home match against Cluj, three days before they play City at the tripe colony. That same week, City have a potentially gruelling match at the Westfalenstadion in Dortmund, not a game they’d really want in the run up to a derby. As per usual this season, United made their best efforts to sabotage them wise plans by yet again going to sleep early in the game to gift the opposition the lead. END_OF_DOCUMENT_TOKEN_TO_BE_REPLACED

Club football made a welcome return after the Paddies were murdered by Germany, the hilarious farce that went on in Warsaw on Tuesday just gone and last night’s incident at Hillsborough which reminded me of a similar event at the same stadium involving Paolo Di Canio and referee Paul Alcock in 1998. 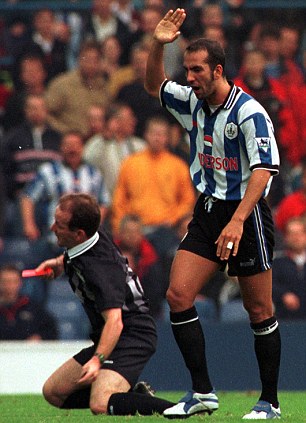 Yesterday’s incident at Hillsborough summed up the verminous shithouses that follow Leeds United perfectly, a cowardly attack on an unsuspecting victim and the perpetrator was welcomed into the Leppings Lane stand by his fellow Leeds fans like a returning war hero. As for the attack itself, what kind of a punch/blow was that which landed on Kirkland? A seven year old girl could throw a better punch… Then there’s former Liverpool goalkeeper Chris Kirkland. Dearie me. I know from personal experience that it’s not the power of a punch or blow that can put you on your arse as much as the shock and surprise of one. If you’re slightly off balance and caught unawares by a hostile move, then it’s understandable but what I really want to know is why did Kirkland require such extensive medical attention? He was lying down for a good 2 or 3 minutes after that incident; it was nothing. In that situation you get over the shock pretty quickly and get up, more out of pride than anything else. On the photograph below, Kirkland is clutching the back of his head – why? He was slapped in the face! I look at people like Chris Kirkland and Robbie Savage and wonder what kind of street they grew up on? 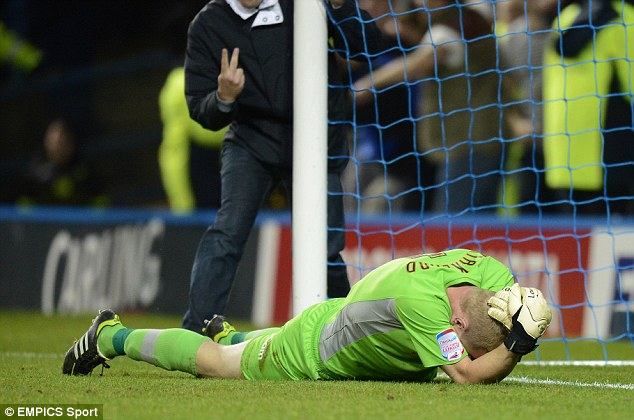 On Tuesday passed, watching the farce unfold and subsequent waffle fest on ITV with Roy Keane, Adrian Chiles, Lee Dixon and Gareth Southgate was more entertaining than any England match I’ve watched in the last eight years. The most enlightening thing we learnt was that Roy Keane had only brought one whistle with him and it’s also now plainly obvious that one of the make up people does his tie for him. The programme bounced back and forth between the studio and hapless pitchside reporter Gabriel Clarke, who was desperately asking questions to PR people who are expertly trained in the art of not giving answers.

The one comforting thing to emerge from Warsaw on Wednesday night was that it isn’t just the English authorities that can be staggeringly incompetent. Sometimes the weather can waterlog a pitch and in the vast majority of cases, there’s bugger all that can be done about it. The Kazimierz Gorski stadium in Warsaw has a roof to make sure that a pitch is playable come rain or shine. The roof was used for the entirety of the Euros just gone when the weather was mostly glorious but not used on Tuesday night when presumably the local met office might have given the stadium management the ‘heads up’ that it was going to piss down. Ah well, I’m sure they know better than me what’s going on.

Too often this season United are getting caught cold. When up against a decent side, like Tottenham for example, it becomes irretrievable. When up against a spirited but rubbish side like Stoke, as today proved, it can be recovered. United had better tighten up and do it quick as there’ll be no margin for error in forthcoming games against Chelsea and Arsenal. On 11 minutes, Paul Scholes gave away a soft free kick which, to use a hockey term, was effectively a short corner for former Blackpool midfielder Charlie Adam. He crossed it brilliantly and it lead to Wayne Rooney heading the ball into his own net. Before Wayne Rooney equalised on 26 minutes, were it not for profligate finishing by Stoke, United could have been 3-0 down. Two goals either side of half time put United 3-1 in front. Robin Van Persie scored Uniteds’ second with a beautiful flick over Stoke keeper Asmir Begovic and Danny Welbeck headed United into a two goal lead. Just as United were threatening to run riot, Michael Kightly went past Rio Ferdinand on 58 minutes like he was a ghost to bring the score back to 3-2. Seven minutes later Wayne Rooney scored to wrap up both the goals for today and the week of the 10th anniversary of his first goal, a brilliant winner at Goodison against a Arsenal. 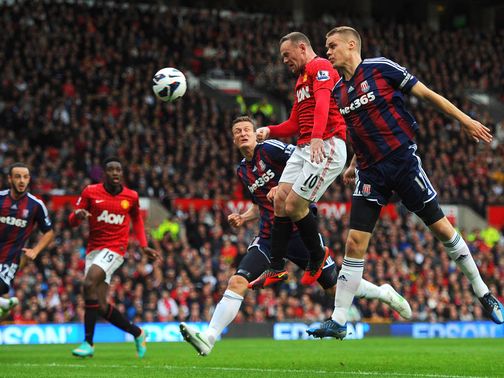 Michael Owen came on for Michael Kightly on 74 minutes and I’m pleased to say that he was warmly if not rapturously received by United fans. Owen was never going to be unconditionally loved by United fans but fair play to him, since he left Old Trafford, he hasn’t said anything out of order. There was a chant from the stretty comparing Owens league title medal haul to that of Steven Gerrard. His most memorable moment for United came when he scored that injury time winner against City in September 2009. That day, my mobile phone nearly combusted with berties sending me angry text messages and conspiracy theories about how referees always play the match until United get the neccesary goal. Oddly enough, with todays winner for City at the Hawthorns deep into injury time and Sergio Aguero’s goal against QPR on the last day of the season just passed, City fans now have a more sanguine outlook on injury time. I wonder why ? 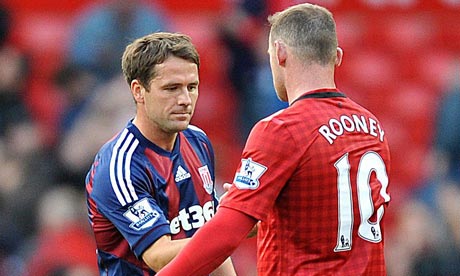 Rio Ferdinand today invoked the ire of his manager for his refusal to wear the Kick it out t-shirts which players were supposed to wear this weekend. Whatever Ferdinands reasons are for not wearing the shirt, it’s surely his right not to align himself to some tacky and toothless gimmick if he so wishes. The only shirt that Ferdinand wears that really matters is the United shirt. Does Ferguson really think that the refusal of (amongst others) Rio Ferdinand, Kenwyne Jones and Reading’s Jason Roberts to wear the shirts will have any impact on the increase or decrease of racism? The Kick it out campaign for this year commenced on Thursday just gone and finishes on the 29th of October. Why does it end then? Will the scourge of racism be cured by that time or will there be some other fashionable Cause célèbre that succeeds it? Sir Alex Ferguson, a man famous for rarely publicly rebuking his players claimed that Ferdinands refusal to wear the shirt was an embarrasment for him. Here was me originally thinking that Fergusons’ disapointment stemmed from Ferdinands refusal to back the campaign (whatever that is) but it turns out that his chagrin is down to his own personal embarrasment. This is surely not the same Sir Alex Ferguson who famously bats for his players against all comers. Anybody would think Sir Alex might not personally like Rio. Everybody knows that there was, to put it mildly, a fall out between Ferdinand and Sir Alex’s son, Darren a few years back. Grown men move on, don’t they Sir Alex ? 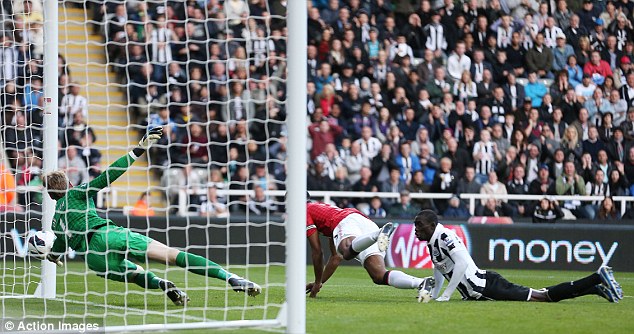