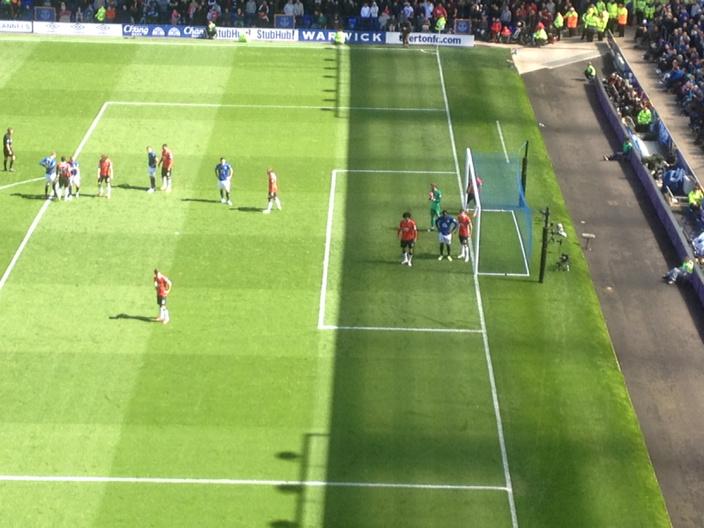 as the final score suggests. Put simply, Everton took their chances and United didn’t take theirs, so fair enough. With the Reds having most of the possession and chasing the game from the 5th minute, after James McCarthy cooly put Everton in front, the home side cleverly picked United off on the counter throughout the match. A minute after McCarthy’s goal, Marouane Fellaini served notice of how the day was going to work out for United when he sent a good chance over the bar after mugging Gareth Barry of the ball.

In the 35th minute, United presented John Stones roses, as he made the score 2-0 with a free header from seven yards. At an awkward angle, Stones rolled his header high to David de Gea’s right as it bounced in off the bar. As I was sat incognito amongst Evertonians, high in the dizzying top tier of the Goodison Road, my ears popped as much through the height I was at as well as the ecstatic reaction of the Evertonians around me. They couldn’t believe what they were seeing, neither could I. 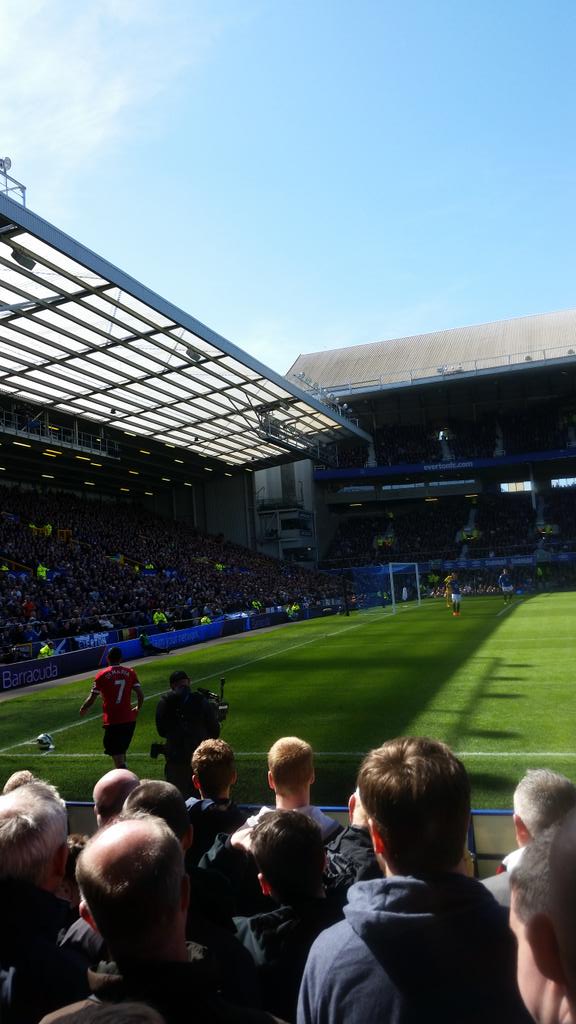 A cagey second half, where United couldn’t get past a very well marshalled home defence was made worse when Kevin Mirallas seized on a sleeping United defence to put Everton 3-0 up in the 73rd. In the run up to that goal, Romelu Lukaku was so far offside, he needed his passport to get back on. Whether Lukaku was offside or not though, United should’ve played to the whistle anyway, something I trust Louis van Gaal will have been telling his players after the match. Ten minutes later, de Gea pulled off a brilliant save from an excellent shot from Mirallas. That was a relief. 4-0 would’ve been a very unfair final score judging from this performance. United’s day was summed up perfectly when Wayne Rooney tackled Paddy McNair in the centre circle. I can be grateful for one thing, United’s attacking performance was never likely to have me blowing my anonymity amongst the scousers.

Just over a year ago, United lost 2-0 at Goodison. It was a performance of such disgrace that it ended up losing David Moyes his job. Even worse than that, twenty three years ago today, I was across Stanley Park, watching United lose 2-0 at Anfield and through consequence, officially crown Leeds United champions. Any United fan who was at that game, will remember the glee of the Liverpool fans in the ground at what was unfolding. They are both low points in my time of watching United. Statistically, United’s loss today was worse than those, in reality, reds should just shrug their shoulders and be confident that things will be alright again pretty soon.