In two days time, it will be the 25th anniversary of Sir Alex Ferguson’s first FA Cup match as Manchester United manager which was won 1-0, with a goal by Norman Whiteside, against Manchester City. Over the last twenty five years, Ferguson’s been written off countless times by the certain people in the media. The first time was in the winter of 1989, the latest time was last week. Yet again all the obituaries have been written in haste, the front cover of this months 442 magazine was obviously commisioned with a United defeat at the Bradford gasworks stadium (thank you Mr Cousins) in the FA Cup expected. After the last match at Old Trafford between United and City, this is the first Manchester derby I’ve looked on with any trepidation since the 3-3 draw at Maine Road in October 1990, the last time City had a side that could’ve been considered somewhere near equal to United.

City today, were virtually at full strength. Sure, Yaya Toure has been collared by the Ivory Coast for African Nation’s cup but his replacement, Nigel De Jong ain’t a bad player to have as back up. City rested first choice keeper Joe Hart and replaced him with Costel Pantilimon, they can’t even say that the change of keeper weakened them as there was nothing Pantilimon could have done with any of Uniteds first half goals. Vincent Kompany was sent off for a two footed tackle on Nani on twelve minute’s, two minute’s after Rooney had headed United into the lead. In my opinion, the sending off was harsh, definetly a foul and a yellow card but not a sending off. Whilst Kompany may have been unlucky to have been sent off, the way City collapsed between then and half time is an indictment on them. Today in the first half, the pressure was really on for City and they can’t use the excuse of being a man down for that collapse. Any team with City’s aspiration’s should be able to cope with the loss of one man, no matter how harsh the decision or how important the player is to the team, which Vincent Kompany obviously is. The one City player who scares the shit out of me when he’s got the ball, David Silva, was anonymous throughout the entire game. The other dangerman Sergio Kun Aguero was a menace that was generally kept well under control apart from obviously the 64th minute when he seized on a James Milner cross after he’d capitalised on a mistake by a very rusty Paul Scholes. 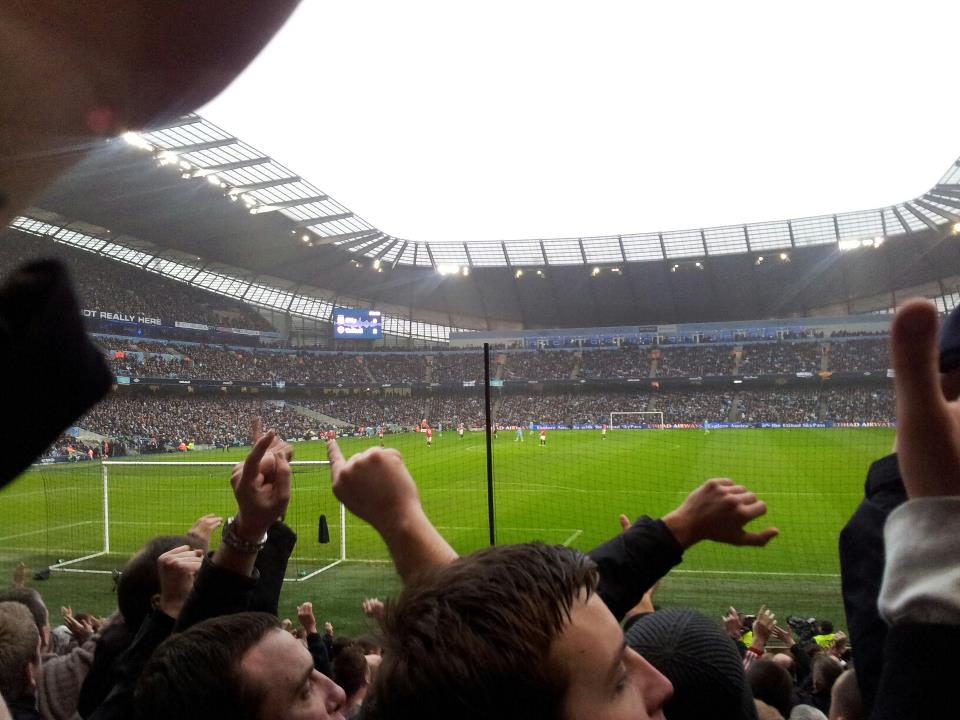 I’ve since heard that from pundits and journalists that Wayne Rooney scored for United, against the run of play on 10 minutes. It must have been a similar run of play that the absent today, Mario Balotelli scored at Old Trafford in October as I never felt United were under any serious threat before City scored. Danny Wellbeck scored a beauty on 31 minutes with a swivelling volley that surprised Costel Pantilimon in the City goal. United were going for City with some gusto. Aleksandar Kolarov made a clumsy challenge on Wellbeck on 39 minutes for a definite penalty, Rooney forced a great save from Pantilimon but heads in the rebound. Before the match a win, any win would’ve been more than welcome. We’re now all dreaming of avenging the 6-1 defeat in October, especially when the magnificent Wellbeck just fails to connect in the six yard box in first half injury time. With all the momentum in United’s favour, half time was a nuiscance, it gave City time to regroup. When Aleksandar Kolarov scored with a perfect free kick, after a pretty soft decision from referee Chris Foy on 48 minutes, even with a man advantage, we knew it wasn’t going to be straight forward. Two minutes before Aguero brought the game back to 3-2, Valencia was tripped in the City box by Aleksandar Kolarov, for a blatant penalty which was waved away, by referee Chris Foy. After Aguero scored, it was a very nervous last 25 minutes.

United have had a couple of bad performance’s and defeat’s lately. Before today’s match, any win would’ve been welcome for United, bearing in mind City’s form and the feeling of dread amongst my red brethren for this game. With City’s failure to sell all their tickets for this fixture and with today’s result, it saves the deeply religious City fans of being in the moral Quandary of what to do on Sunday afternoons when their team are at home. Since the final whistle, a couple of hours ago, I’ve had text’s and phone call’s off red’s that I both like and respect telling me that it feel’s like a defeat or at best, a draw after the second half performance. As much as I like and respect these guy’s, I think it’s complete bollocks. United have won a game, back’s to the wall, away from home against a team that on present form, are the best in the country. There’s a lot of talk of papering over the cracks, especially with Scholes coming out of retirement but the crack’s have been getting papered over ever since them parasites seized control of the club in 2005. Whilst City have been running round like Viv Nicholson after too many Babycham’s and financial armagedon might only be round the corner for United, we might as well enjoy days like today as we’ve all known for a long time what’s coming.