In my memory of watching United (since 1981), I can say that every time United have got to a domestic semi final, there has been a justifiable confidence amongst reds of getting through to the final of the respective cup. In that time United have prevailed in seventeen out of twenty semi finals, against clubs/teams like (come on) Oldham, Arsenal, Liverpool and many other smaller clubs. However, last night, there must’ve been a wise premonition scattered amongst the United crowd. Not one red said to me in the intervening fortnight between the two legs of this semi, with the usual bravado, of “let’s wait ’til we get these back to Old Trafford”. Not once did I hear United fans sing jolly rhymes about visiting the country’s biggest open sewer, Wembley, like they normally do at semi finals. After the first leg defeat, I was expecting a repeat of the fabled atmosphere that the equivalent game in 1992 had, when United beat Middlesbrough in what was the Stretford End terrace’s last hurrah. The atmosphere last night though instead was one of nervous apprehension. The nerves of the crowd must’ve spread out to the players on the pitch. I’m hoping that is the most accurate explanation for what was a performance of almost comical incompetence. 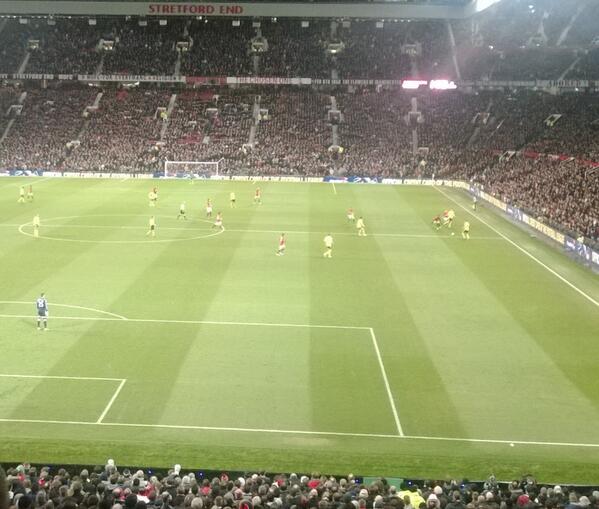 When United drew Sunderland for the semi, everybody was pleased. Sunderland were still recovering from the ill advised appointment of Paolo Di Canio. At the time of writing, they are second bottom of the Premier League. That position though is a misnomer. This season, they have won away at Goodison park, beaten the present Premier League champions, the present Europa League holders and the probable winners of this seasons Premier League. In other words, despite their position they are no mugs.

A night that had more twists than a warped corkscrew, started innocuously enough. In the first half, United as per usual, had loads of the ball without really looking threatening. Sunderland first set their stall out in the 19th minute when Fabio Borini gave David De Gea a scare, with a vicious shot which went just over the the Stretford End goal. Eighteen minutes later, Jonny Evans headed United in front on the night, diverting a mis hit Danny Welbeck shot into the Scoreboard End net. Once upon a time, this would’ve lead to a collapse of the opposition as a relentless wave of United pressure would’ve engulfed them. Nobody thought that last night though, even for the fact that United had equalised in the tie, there was no feeling of anticipation in the Old Trafford crowd.

In a drab second half, Sunderland like so many other teams this season realised, that United were a bit blunt of potency. From 75 minutes on, Sunderland took the game to United and suddenly, like the Swansea FA Cup match two weeks ago, we were wondering if United could get to extra time without conceding a goal. Adam Johnson had a great chance on 76 minutes but Alexander Buttner for once, did his job well in blocking him. Three minutes later, Marcos Alonso shot across the face of the Scoreboard End goal for what was a heartstopping moment. In the last minute, John O’Shea fouled Hernandez which gave Januzaj an opportunity for glory. With the very last kick of normal time an Old Trafford crowd, expecting something akin to David Beckhams goal against Greece for England in 2001, were instead treated to Januzaj harmlessly chipping the ball into Vito Mannone hands. 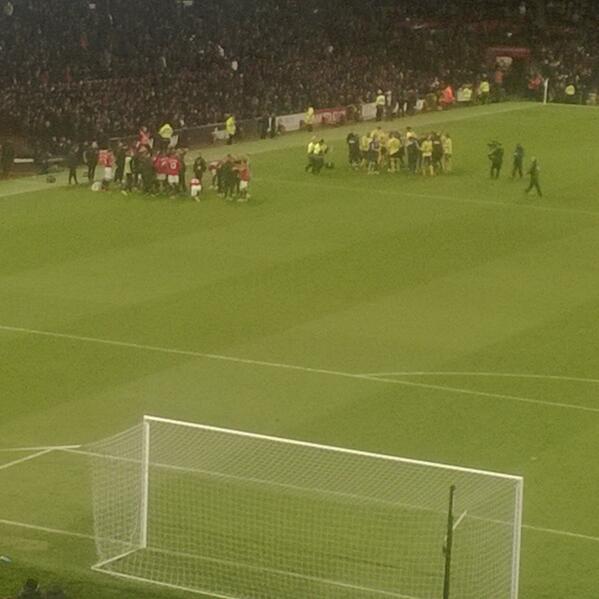 Only in extra time did United come to life, but they were hardly rampant. Towards the end of the first period, both Hernandez and Welbeck missed great chances to put United ahead in the tie. A nervous second period eventually yielded a Sunderland goal that I had been expecting and dreading all night. In the last minute of extra time, Sunderland full back and Kersal lad Phil Bardsley, shot speculatively towards the Scoreboard End and what should have been an easy and routine save for De Gea, slipped through his hands to the horror of all around me. That Sunderland’s lifeline came through a David De Gea mistake was for my money probably the cruelest thing of all. As cruel as it was, the goal was the very least Sunderland deserved. Nobody near me was surprised when Sunderland scored. It was hardly against the run of play.

Nobody could argue with the outcome, United had been abysmal and Sunderland had deserved to go to the final. As a desparing Old Trafford crowd heard a shout of two minutes injury time go up, Januazaj via a one-two with Chris Smalling, got a great cross into the Sunderland six yard box and Hernandez, whom had previously looked dead on his feet, popped up and took the match to penalties. There was no feeling around me of fate being on our side. I couldn’t believe that United had been so lucky, having been so negative for most of the game.

Danny Welbeck, about to send his penalty flying over the bar quicker than an alcoholic given carte blanche

What happened next was so spineless and poor that writing now, twelve hours after it occured, I still don’t quite believe it happened. The penaltes were possibly some of the worst I have ever seen at this level of football. Welbeck and Jones alerted air traffic control with their efforts. Januzaj looked like a turkey on Christmas eve as he walked up to take his. Looking at Rafael’s face as he was tasked with saving United’s arse with his penalty, I knew it wasn’t gonna happen as his had clearly gone, as he was walking towards the Scoreboard End to take it. Ultimately, United only have themselves to blame. To fail to beat Sunderland over two legs is an indictment of the malaise and lack of confidence that’s running through the team. Fair play to Sunderland, they wanted this more than United.

Darren Fletcher, about to score United’s only penalty success in the shoot out.

It’s one thing losing your two best players for a match, another thing altogether to not have the depth of squad to replace them for a game against Sunderland. It’s been said many times over the last six months about the need for United to strengthen, but most of that talk is directed to the need to replace an aging central defence and Roy Keane, a mere eight years after he “left” United. It’s becoming more obvious with each passing game, United also need to strengthen up front too. They have two world class centre forwards in Wayne Rooney and Robin Van Persie who were both missing last night. They are also two players that are widely expected to be going in the summer. They also have Welbeck and Hernandez, two very popular and likeable lads but over the long term, not good enough for United. If the press are to be believed, United have a strong chance of imminently signing Juan Mata. Having witnessed last summer’s debacle, I’ll believe it when I see but for all of Mata’s undoubted quality, United need far more changes of personnel and with it, a patient fanbase is also required. This is not a crisis, but it’s going to take time to sort this out. Time that Moyes has to be given. United fans have recently, both home and away, been very vocal in support of Moyes. We’ve got to keep that up and try and deflect from the clueless empty vessels that pollute radio phone ins and social media under the guise of being reds.