There was a time when opposition fans were too scared to come to Old Trafford in any significant numbers due to the knowledge that United fans were famously inhospitable towards visiting supporters. If you ever watch a re-played United match from the 1970s on ESPN classic or ITV4, that was played at Old Trafford, you’ll notice that when the opposition score, there’s virtual silence in the ground. Friends of mine who remember Old Trafford in the 1970s say that while the football wasn’t to the standard we’re used to nowadays, the atmosphere at for United home games was collosal.

Entrance turnstiles to the Stretford End, circa 1980s, this must be just pre kick off as there’s no que

I went to my first United match in March 1981, it was a 2-1 victory against a championship challenging Ipswich Town who were managed by the late Bobby Robson. I became an Old Trafford regular in season 82/82 and one the first things I noticed was when the oposition scored, there’d be a tiny pocket of supporters on the Scoreboard terrace just below J & K stands celebrating. In them days, the only teams that would bring any decent amount of travelling support would be Liverpool, City, Newcastle United and Sunderland. The likes of Arsenal, Tottenham or Everton would bring good numbers if their teams were doing well otherwise, they’d be lucky to fill out two pens on the scoreboard terrace (1500 approx). I remember the atmosphere at Old Trafford in them days being lively due to the  fact that people and more importantly, kids, could pay £1.10 on the gate of the Stretford End terrace, £1.30 on the Stretford End seats (E stand) or the Stretford End Paddock which cost £1.20. You had to be at the ground for 1PM at the very latest or you weren’t getting in. It didn’t really matter who United were playing, the atmosphere would build up over the two hours preceeding the match so when the teams emerged from the old tunnel in the middle of the main stand, the ground would be rocking. Nowadays, the ground is normally 4/5s empty half an hour before kick off so unless United are playing Liverpool or City, the atmosphere is more subdued. 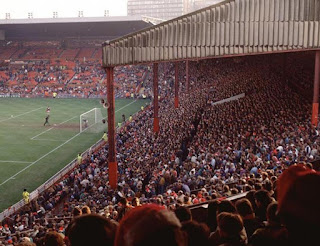 Stretford End pre match in the early 1980s, notice how it’s full while the C & D stand on it’s right hand side are virtually empty

When Martin O’Neill took over as Aston Villa manager in the summer of 2006, one of the first things he decreed was that the away fans should be moved from Witton End of the ground and into the Witton Lane stand, left pitchside to where the away fans used to be. At Newcastle, away fans are that high up in the stand that I swear you can nearly see Scotland on a clear day at the Sports Direct Arena (touché). At Goodison Park, opposing fans were moved from the Park End many years ago and placed into the Upper Bullens stand. I can reel off a whole host of examples but the main point is, when these changes were made, supporters of the respective clubs weren’t lamenting the re-organisation as the death knell of the grounds atmosphere. The whole reason for these changes was to give the home fans the premium seat in the ground.

There’s an experiment taking place next month at Old Trafford for the United home match against Aston Villa where, the visiting fans are going to be placed into the top tier of the United road/North/Sir Alex Ferguson stand. Recently I’ve heard what I believe to be a lot of melodramatic nonsense about the adverse affects that this experiment and it’s probable end result is going to have on the atmosphere at Old Trafford. A lot of matchgoing reds that I like and respect are saying that it’s going to ruin the atmosphere at Old Trafford. The first thing I noticed was the concern over the demise of the self celebrated K-Stand top left. From where I sit in the old B-Stand (South stand) I see pockets of reds in the K top left making gestures and shouting retorts to opposing fans but the devastating wit and repartee that I’m always reading about in UWS is inaudible to me 100 yards away.

The other thing about the worry of the adverse affect on the Old Trafford atmosphere is the belief that opposing fans provide some sort of bouncing post to a great atmosphere at Old Trafford. To me, that is absolute bollocks . When the atmosphere was bouncing in the stretty in the 1980s and the opposing fans that had bothered turning up were at the opposite end of the ground, what was the provocateur for the atmosphere then if we’re so reliant on them being in close proximity ? What about when United played Barcelona in 1984 and the atmosphere was like nothing I heard before or since ? There must’ve been a maximum of 50 Barca fans in the stadium that night. It’s actually quite embarassing that United fans claim to need opposing fans nearby to rouse an atmosphere. Apart from showing a lack of imagination, something I’ve always believed United fans have had in abundance, can anybody tell me what inspiration a load of wooden heads like fans of Stoke, Wigan or Blackburn Rovers provide to creating a good atmosphere ?