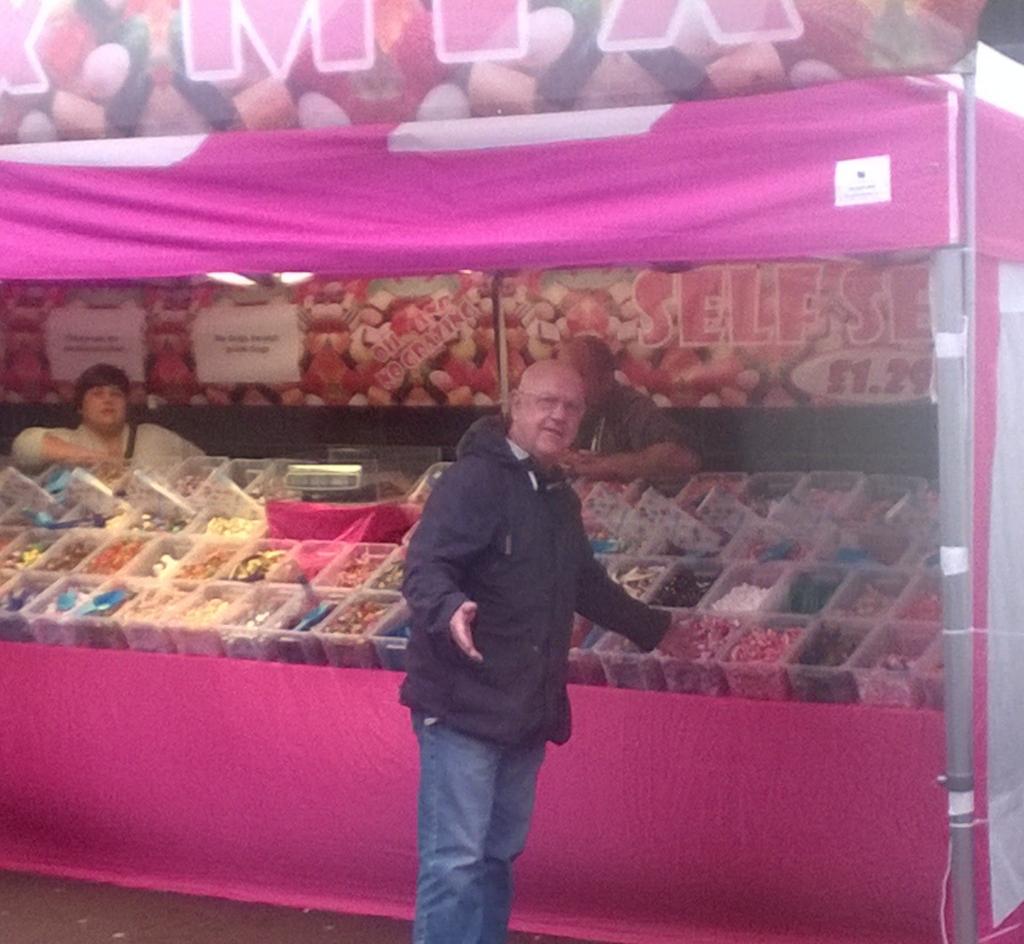 Louis van Gaal said he was going to use two different teams for the games against Sunderland and MK Dons. Most Reds were surprised that van Gaal thought United had one decent side to put out, never mind two. After what we witnessed tonight, we were right to be surprised. Fringe players were used and they were joined by Jonny Evans, Javier Hernandez, Danny Welbeck and due to rumoured extensive lobbying by Bem Brasil restaurants, Anderson turned out too. The hopes of United fans that Anderson had been deported were shown for the fallacy that we always feared it would be. While United can palm off the piss poor Nani to Sporting Lisbon for a season while paying his entire wages into the bargain, they can’t even get a club to take on Anderson in the same circumstances. It looks like United are stuck with him for another twelve moths before his contract expires but don’t worry, we still have Nani for another three years once his loan finishes at the end of the season. The only United player who walked off the pitch with any credit tonight was David de Gea..

The seats allocated to Reds in a stand that, according to my ticket, didn’t actually have a name. In this regard, the stadium is ideal for the 8,461 regular clientele it regularly draws to its bland and souless surrounding. The local police and security were surprisingly and refreshingly polite and helpful in and around the ground. This was by some distance the best deal of the night for the United fans who had travelled to this town of roundabouts and trees.

United didn’t have a shot on target until the 77th minute, by this time they were 3-0 down. In the 24th minute, Ben Reeves capitalised on a schoolboy error from Jonny Evans to feed Will Grigg to put MK Dons into the lead. From here on in, United who were already poor somehow got even worse. In the 64th minute, soon after having a good penalty appeal turned down for a Jonny Evans handball, MK Dons scored again. United again gave the ball away, this time in the midfield to gift MK Dons a break. From the attack, Reeves again fed Grigg who chested the ball past David de Gea to make the score 2-0. On 69 minutes, United yet again gave the ball away cheaply and yet again, Reeves fed the goalscorer. This time Benik Afobe was the beneficiary.

At this point I turned round to the lads I was with and said I’ll take 3-0. I feared something far worse due to the laughable incompetence of the United side. This was also the point that an exodus of mard arses left the stadium in the United section. With a bit of luck, these people will stay away from United aways in future and leave it to proper Reds to get the tickets. 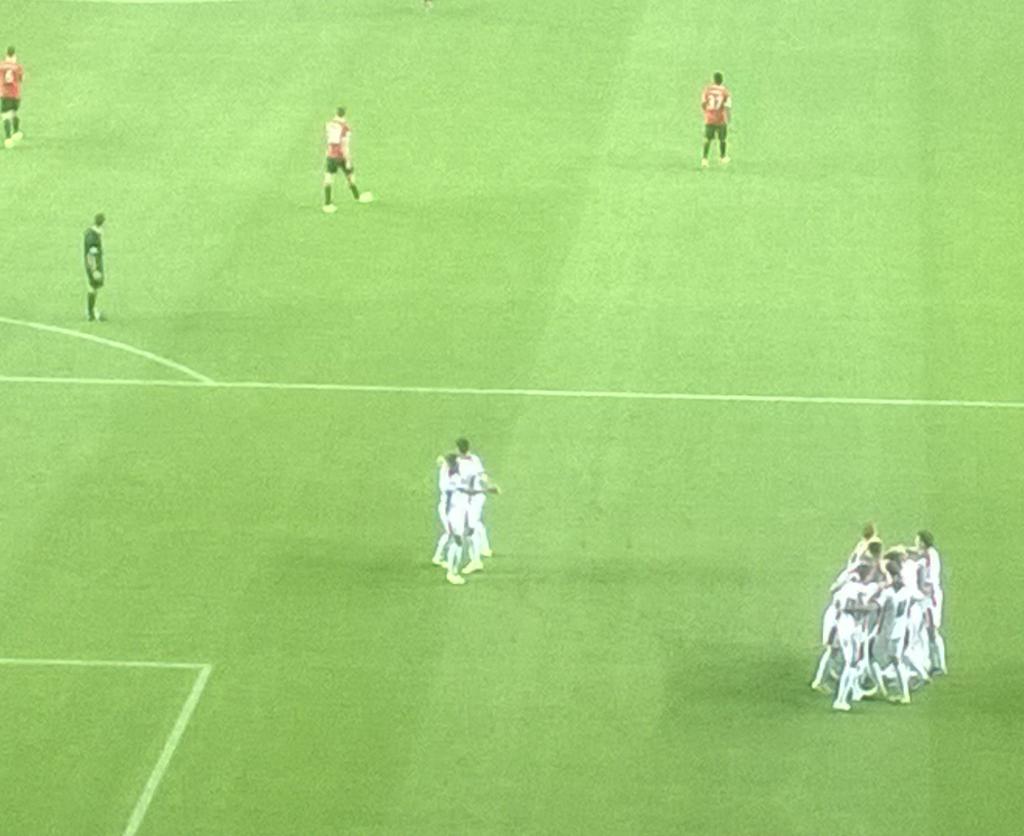 With seven minutes to go, following a half hearted attempt to head the ball from Marnick Vermijl, Afobe won the ball near the eighteen yard line. Afobe then ran through United’s defence like they were statues to make the score 4-0.

90mins 4-0 down. Camera zooms into United end desperate for misery but gets thousands of daft Reds singing/clapping/jumping. Chin up, Sky

The mood among Reds in the stadium was not anger by the time the score got to 4-0, more of resigned and rueful laughter than anything else. The United fans that stayed sang an endless version of the calypso whilst the MK Dons fans, who were seeing their side beating Premier League opposition 4-0, sat there mute. I don’t know what passes for passion in that part of the world but having witnessed fans of the local club tonight, I have a feeling that an economic spreadsheet or maybe an accountants’ Christmas party is what really gets them going. It certainly isn’t football. 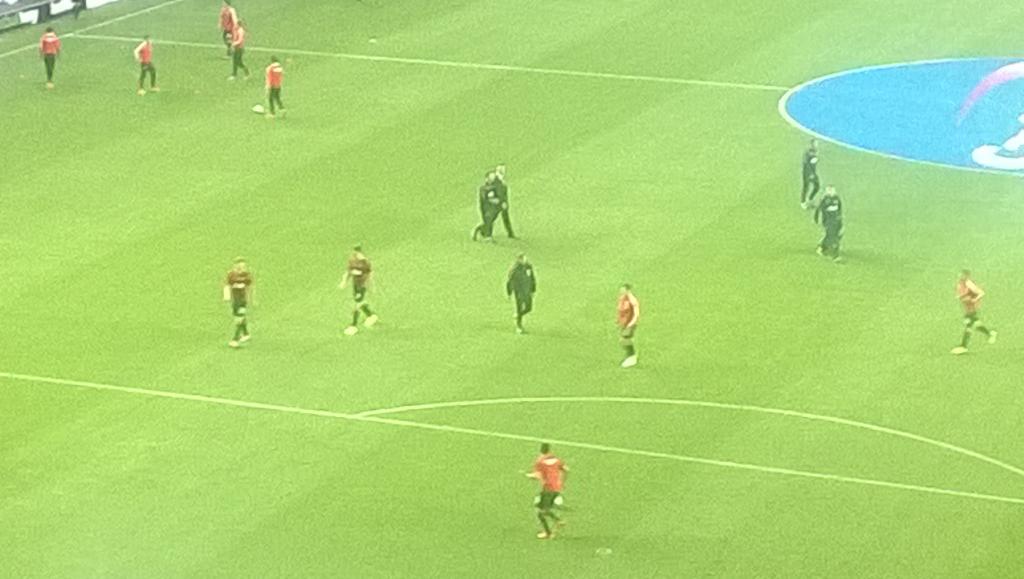 United players in the pre match warm up. This was the best United played all night

Since 1993, United have generally fielded a shadow side for League Cup matches, especially at early stage matches like tonight’s. United have come unstuck on the odd occasion but generally the fringe side would get knocked out and walk off the pitch with some dignity intact. Not tonight, losing 4-0 to a side two divisions below is as bad as it can get. The half hearted incompetence of the United performance was a disgrace to the shirt that six and a half thousand people had schlepped down the M6 and M1 to support. Under normal circumstances, with European football as well as league title contention to deal with, the League Cup is considered, correctly in my opinion, expendable. This season United are not burdened with any European football and nobody seriously believes that they have a chance of winning the title. This means that before we even get into September, United have only one feasible chance of silverware this season and our participation in that competition doesn’t even commence until January.