Going into injury time of the 1st half, things didn’t look too bad on the surface. United looked like they were going into half time only one goal down after been played off the pitch by City. Alvaro Negredo then had a free header from a Samir Nasri corner which was guided into the back of the United net by the knee of the imperious Yaya Toure. It was no more than City deserved but whatever the merit, it was lousy time to go 2-0 down. United didn’t force Joe Hart into making a save until Marouane Fellaini tried beating the City keeper high on his near post on 67 minutes. A Wayne Rooney corner on 79 minutes saw Patrice Evra lose his marker, Sergio Aguero and head against the foot of Joe Harts left hand post. Rooney’s goal eight minutes later gave a scarcely deserved veneer of respectability from a United side which hadn’t earned an ounce of respect. There was times yesterday when it looked like City had 12/13 players on the pitch. Michael Carrick was anonymous and whilst Fellaini was busy, he was outperformed in this litmus test against Yaya Toure. Worst of a pretty bad bunch was Ashley Young. Tom Cleverley replaced the hilariously hapless former Aston Villa winger immediately after City went 4-0 in front on 51 minutes.

United fans were in great voice yesterday, particularly after going 4-0 down. A simple  and constant chant of ‘twenty times, twenty times, Man United’ to the tune of the hymn Give Me Joy In My Heart gave more encouragement to reds than any of the ensuing shambles on the pitch. Whilst the apparently mass mustachioed, blue cladded hordes, whom all seemed to be called Bertie, partied long and hard until at least nine o’clock last night on streets of Hyde and Hazel Grove, United lads’n’ lasses were having a good post match drink on Deansgate, Castlefield and Oxford Road. The one thing to celebrate last night was that no matter what happens on the pitch, we were to wake up this morning still reds. Blues can have their well deserved day but ultimately, they’re stuck with being blues for a lifetime, especially now that their Chelsea shirts have been quietly thrown away. For that, we should be all be grateful. 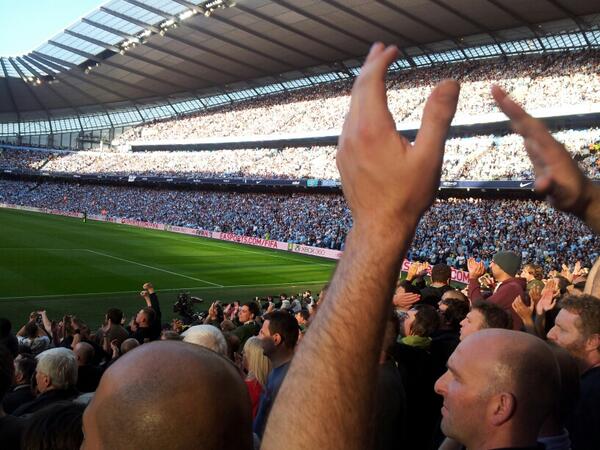 Thanks to Lee Thomas for his help in writing this