Once out of the train station at Stoke, some more savvy reds had converged in the The Terrace on Leek Road. There was large and visible Police presence outside the pub but fair play to the Staffordshire Police, they kept low key and didn’t make a nuisance of themselves, unlike their rabid neighbours in the West Midlands for example. Inside the pub, plenty of beers and new year cheer were being had as reds joyously sang Not Nineteen Forever as it boomed over the pubs speakers. As we left the pub and saw a small convoy of buses outside there to take us to the ground, I was massively impressed by the organisation. I had no idea at the time however of the garbage that awaited once we got to Stoke City’s almost subterranean stadium. I should have known in reality, I’ve said it many times before and make no apology for saying it again, in my thirty something years of watching football I have never ever seen a good game of football involving Stoke. They were formed around the same time as Notts County. The Nottingham team went onto influence Juventus when it came to shirt design, Stoke City went onto influence deck chair manufacturers. 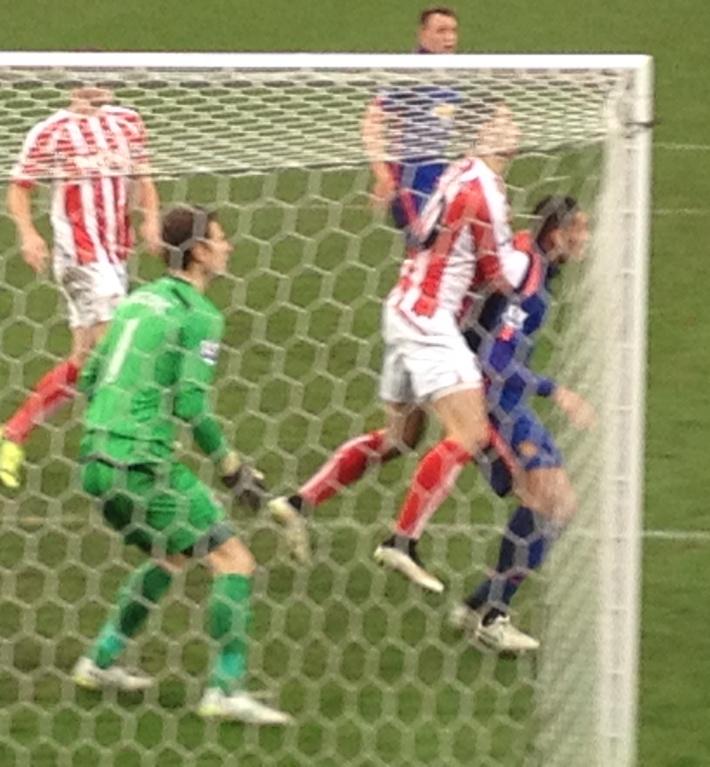 Having got to the stadium in good time and having bid some old red comrades a happy new year before the game, we watched Stoke kick the game as the hour struck twelve. Unfortunately, United decided to kick off at two minutes past and by that time, we were a goal down due to some hilariously incompetent defending from a corner taken by Marko Arnautovic. Nobody picked up Peter Crouch (I mean come on, he’s pretty conspicuous) and he nodded the ball onto an unmarked Ryan Shawcross who hoisted the ball over a stranded and blameless David de Gea. Seventeen minutes later, some diabolical defending by Jonny Evans left Mame Biram Diouf one-on-one with de Gea from 12 yards. Seconds later, he put the ball so far over the bar that nearby air traffic control started diverting aircraft as a result. It was at that moment that I remembered why United sold him in the first place. He plays football like a JCB. He’s at the perfect club playing for the perfect manager for his skill. 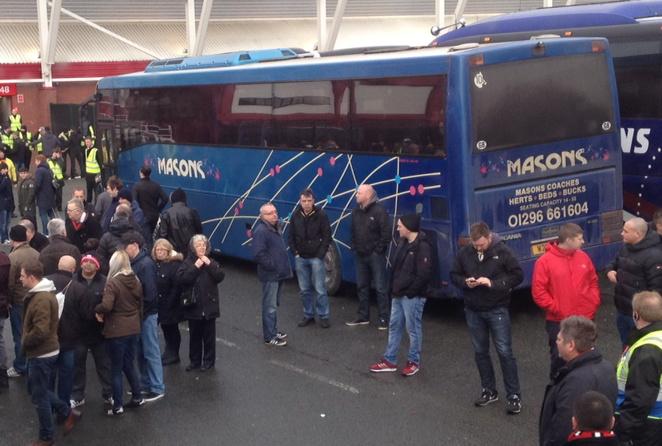 Reds in the sealed off compound after the match. Patiently looking forward to getting back to relative civilistation

New year bonhomie was in short supply from a home crowd mostly populated by people with very thin family trees. It was even more sparse when Radamel Falcao equalised in the 26th minute. As United fans celebrated in amongst the home sections, the ground was awash with unwashed locals frantically pointing out these infiltrators to police and stewards. Near me on the segregation line of fans, a Stoke fan was screaming something incomprehensible to me over the line (it certainly wasn’t happy new year). I’ve no idea what he was saying but his teeth were all colours of a snooker table (with the exception of white) and I got a strong impression that he was in no rush to make friends with me (alas). At half time, I had an epiphany of why the usual inhabitants of this ground could be so unusual. Having gone and got a cup of tea (a beer was out of the question), I quickly realised that the drink was disgusting. I’ve heard it said that “it’s in the water” when it comes to local characteristics, don’t ever drink the water from the Trent near Stoke, you could turn into one of them.

The second half was only memorable for the farce the game became with the howling wind making proper football unplayable, something which will have undoubtedly have suited the home side. Ashley Young pulled up with an obvious hamstring injury in the 73rd minute (which will probably see him out for four weeks). For this heinous act, Young was booed relentlessly by the Stoke fans as he lay on the ground while the game went on. Mark Hughes was jumping up and down out of his seat like he had a spring stuck up his arse** and the Stoke fans were about this time shouting handball so frequently, I was checking my programme to see if they had a player called handball. As for Ashley Young, when I think about it, he got off lightly with the abuse for pulling his hamstring. Aaron Ramsey of Arsenal got a compound fracture of his lower right leg at Stoke in February 2010. When Ramsey returned to the stadium in August 2012, he was roundly booed by Stoke fans for getting that injury at their ground two years earlier. Every time I go to Stoke, I feel the need to thank my parents that I don’t come from this place. I’ll do it again, thanks Mam, thanks Dad. 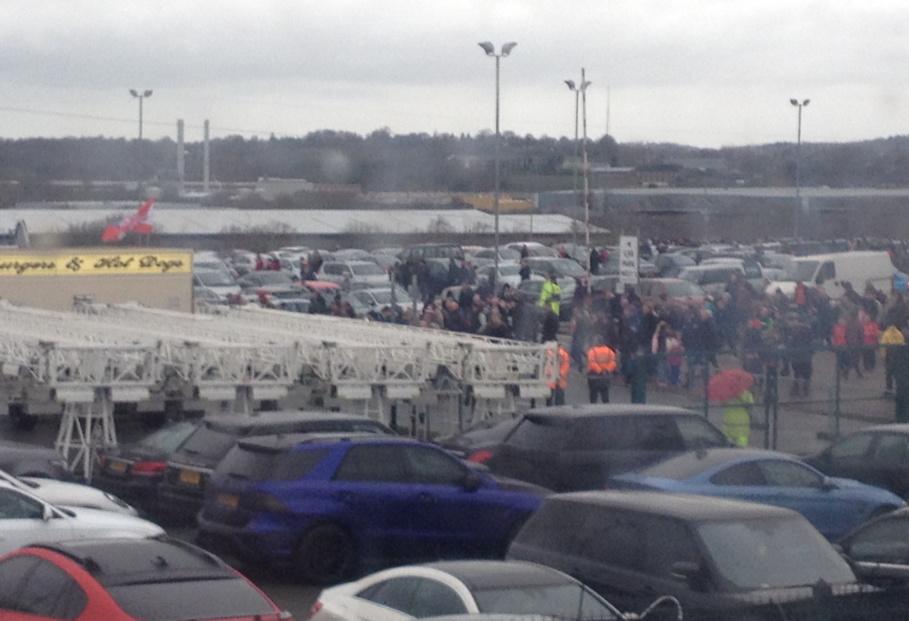 The barren wasteland that surrounds Stoke’s stadium. In the lower part of the photograph are the cars of the Stoke stars, the top half of the photo is wonder of the local yonder

Things could be a lot worse. I’m convinced that despite the recent good form of Southampton and Tottenham’s brilliant win against Chelsea today, when it comes to the nitty gritty in April/May for the Champions League qualification, it will be between United, Liverpool and Arsenal for last two qualifying places. Liverpool blew a two goal lead against a feisty pub side today and Arsenal lost 2-0 at Southampton. When all’s said and done, bearing in mind United drew at a truly horrible place to both play and watch football, it’s gone as well as it could possibly go. 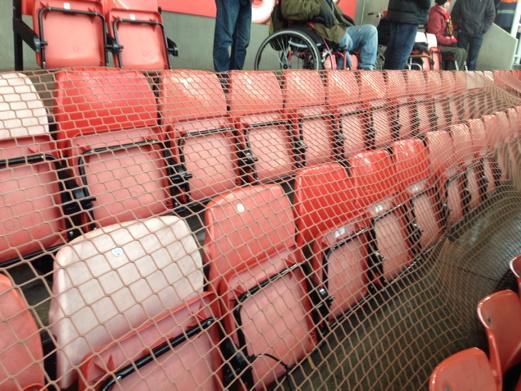 Two rows of seats netted off in the lower part of the United section in the South Stand today. These seats are not put on sale as it is right in front of the disabled section (for away fans) and because United fans constantly stand, the people directly behind them cannot see the game

Commiserations to Moston Dave who, having bought a ticket off a tout for £80.00. On the train, he missed his stop at Stoke and next stop was at Milton Keynes. He then got a fine off an inspector for having an invalid ticket. Dave, if it’s any consolation, you missed a match that we all had to watch and you may have even got a better side of the bargain the more I think of it. On that note, I’d like to wish Dave and you, dear reader, a happy new year.

*As a new years resolution, there will be no more profanities in this blog

**Like all new years resolution, that went up in smoke quicker than most peoples cigarettes after they resolve to give up