A sacking this week, this time at Chelsea, could have the opposite effect on van Gaal’s tenure. END_OF_DOCUMENT_TOKEN_TO_BE_REPLACED

The obituaries had been written about United over the summer, END_OF_DOCUMENT_TOKEN_TO_BE_REPLACED

Photographs from Carrington immediately after Ryan Giggs’ appointment showed ‘Happy Valley’ under new management. Players were laughing and joking, Paul Scholes was back in the fold, even Bryan Robson put an appearance in to show the United family were all, um, united. I’m always suspicious of these photographs; they look like something TASS would have put out before the Cold War went warm. For all my suspicions of these photographs, there’s END_OF_DOCUMENT_TOKEN_TO_BE_REPLACED

We’re back to that time of year when the trees have come down, Father Christmas is back on the dole and everybody’s bills come through the letterbox. The time of year when people go off the beer and there’s slightly less cheer as the festivities disappear. That can only mean one thing; we’re back to the third round of the FA Cup. This is when players and supporters of smaller clubs get condescended by clueless commentators from ITV and BT Sports. Bemused players, who didn’t grow up in the UK are asked, “just what did the FA Cup mean to you as a boy growing up in Spain/Holland/Germany etc”? Before that though, we had the New Year’s Day fixtures. END_OF_DOCUMENT_TOKEN_TO_BE_REPLACED 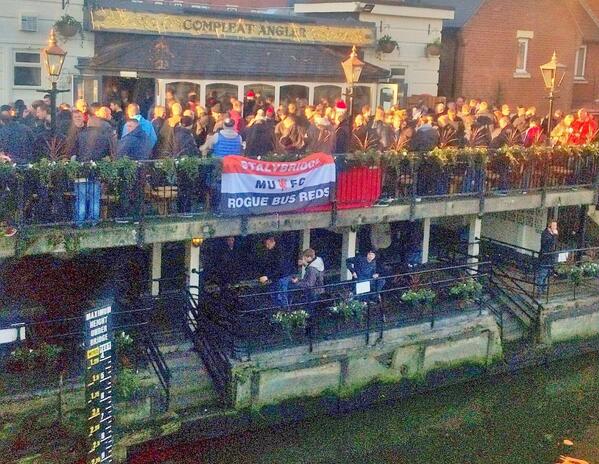 United fans had already resigned themselves to being one down in the 15th minute when Wes Hoolahan somehow missed an open net in the Barclay End of Carrow Road. END_OF_DOCUMENT_TOKEN_TO_BE_REPLACED