The first half was cagey. It became apparent that David Moyes was actually telling the truth when he said Wayne Rooney was carrying an injury. We’re so used to disingenuous managers (particulary Sir Alex Ferguson) claiming their star players have injuries just prior to a big European match, only for them to make a miraculous recovery in time for the match, that nowadays we take the assertion with a pinch of salt. That can be the only explanation for Rooney’s uncharacteristic dithering when in good possession throughout the night. In the 7th minute, Rooney had a chance but couldn’t quite control the ball before being dispossessed by Bayern Munich’s amazing Macy Gray lookalike defender Bonfim Dante. I have no doubt that a fully fit Rooney would have made a better attempt at scoring. Ten minutes later, Antonio Valencia had the ball in the back of the net but both he and Shinji Kagawa were miles offside. In the 57th minute, the goal that we all believed United could score came from a pretty unlikely source. Patrice Evra, in his probable elongated swansong scored probably the best goal he’s ever scored right in front of the United fans in the stadium. A United break on the right flank resulted in an Antonio Valencia cross being slammed in by Evra from 20 yards. I reckon that Evra was still mentally celebrating that brilliant goal two minutes later when he let Mario Mandzukic sneak on his blindside to equalise for Bayern. Oddly enough, Evra made an almost identical mistake in this same stadium four years ago when Bayern last played United in Europe. Ten minutes later, Thomas Mueller sneaked around Nemanja Vidic to put Bayern in the lead for the first time in the tie from a hard ‘n’ low Arjen Robben cross. In the 76th minute, Robben put the tie to bed with a shot which deflected off Vidic and went past the helpless David De Gea on his far right hand post. I could live with a 3-1 defeat. A heavier loss would’ve been harsh and I’ve no doubt that Munich have been the better side over the two matches against a game but well beaten United side (no moral victories here pal).

There’s no doubt that for all Bayern’s superiority, they were given a scare by United over the two legs. Poor finishing from Danny Welbeck combined with a shocking refereeing decision in the first leg denied United a lead going into the second match. There was yet another sense of deja vu from the United/Bayern match in 2010 when Sir Alex Ferguson picked a clearly unfit Rooney for that match. David Moyes decision tonight to pick an injured Wayne Rooney was one thing. The main difference is that Sir Alex took Rooney off when he saw that he wasn’t up to playing. For reasons known only to himself, David Moyes persevered with Rooney when he should’ve substituted him for Javier Hernandez. Moyes instead took Darren Fletcher off for Hernandez in the 73rd minute. He should’ve took Rooney off Hernandez and brought Ryan Giggs on for Fletcher. What was really surprising was when Moyes took Danny Welbeck off in the 80th minute for Adnan Januzaj. To leave Rooney on in those circumstances reeked of desperation. 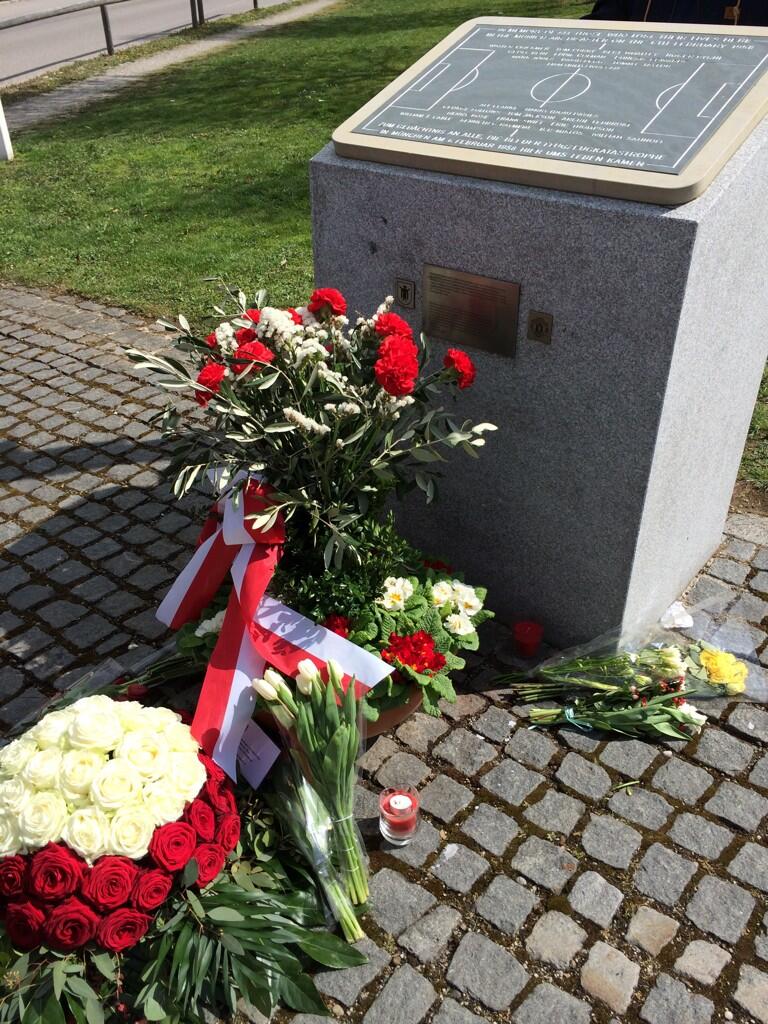 Flowers, candles and ribbons left at the Munich air crash memorial at Manchesterplatz in Munich (photo courtesy of Steve Armstrong)

Reds enjoyed Munich, it’s an easy place to enjoy. There’s no hot headed Latin coppers losing their bottle at the sight of a crowd and the beer is famously good. The locals are generally a welcoming bunch. The only fly in the ointment is that the ground is in the middle of nowhere. From getting off the S-Bahn at Fröttmanning, there’s still a fair old walk to the ground but for that, it’s a good place to visit. There’s next to no chance of United visiting there next season, hopefully it’ll be back on the cards before too long though. 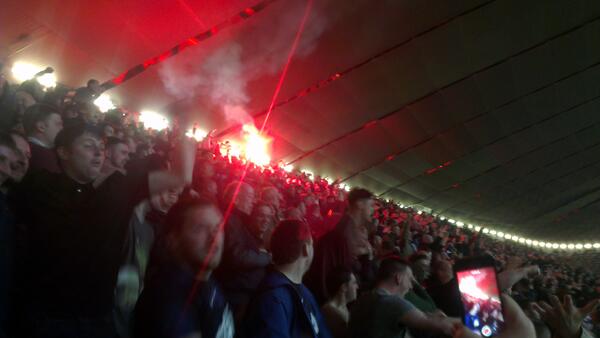