City’s not entirely unexpected defeat at White Hart Lane yesterday meant that t-shirt printers were frenzedly printing up champions t-shirts from this morning, ready for the baying masses at Old Trafford tonight. After the final whistle, listening to the United fans trying to reach the high bits of We Are the Champions by Queen still brings a wry smile to my face. The post match celebration on the forecourt near the statue of the Holy Trinity was one that I will remember for a long time. Flags were flying high, there was a football being kicked high and wild into the celebrating crowd and a joie de vivre amongst reds that was infectious. Even the coppers, not usually people to encourage a good time, were laughing. The swagmen were walking round doing steady business and the fanzine sellers were trying to sell me a fanzine I’d already bought when United played City a couple of weeks ago. Over the years United fans have at certain times been a bit blasé about winning the title but tonight was not one of them occasions. It obviously takes a despised rival winning the league to remind us just how special it is. We can only be grateful that Liverpool haven’t won the title since 1990, that would be unbearable. It is even sweeter that the scousers blew a good chance of winning the league in 2009. City won the title deservedly last season even if the circumstances were a little bit painful, there’s no doubt in my mind that the right team won it. It meant that I’ve not wanted a league title as badly as this since 1993. This season, the right team again have won the title, it nearly always is. (Blackburn in 1995 being the obvious exception).

On a personal level, I was 20 years old before I ever saw United win a title, I’ve recently turned 40 and have now seen United win the title thirteen times in the intervening twenty years. Ryan Giggs, a man who has claimed a medal for all them thirteen occasions has now won the league the same amount of times as this coming Sundays opponents, Arsenal, have won in their entire history. These are incredible times to be a United fan. This time last year appeared to be the dawn of a new era. We were all told the blue moon was rising and our day was done. On the quiet, behind the bravado, we believed it. City had and still have an excellent side but they’ve also got got a team who’ve become complacent in a way that Sir Alex Ferguson would never have allowed. Last summer, we were all screaming for a midfielder. We all recognised Van Persie’s class but up front was not exactly a problem for United in the season that City won the league, the midfield was. Everybody says that Van Persie was the main difference between United and City. Whilst he obviously had an impact, particularly against City themselves, the main difference was in the respective managers. The biggest problem for Ferguson’s bête noire Roberto Mancini throughout his time as City manager is his sheer likeability. When Ferguson was dueling with Arsene Wenger and Jose Mourinho, they were easy to dislike but Mancini is such that only a twat would dislike him. That is his biggest weakness. When he tries the so called mind games or kidology, we just laugh in a way we never did when it was Mourinho or Wenger. 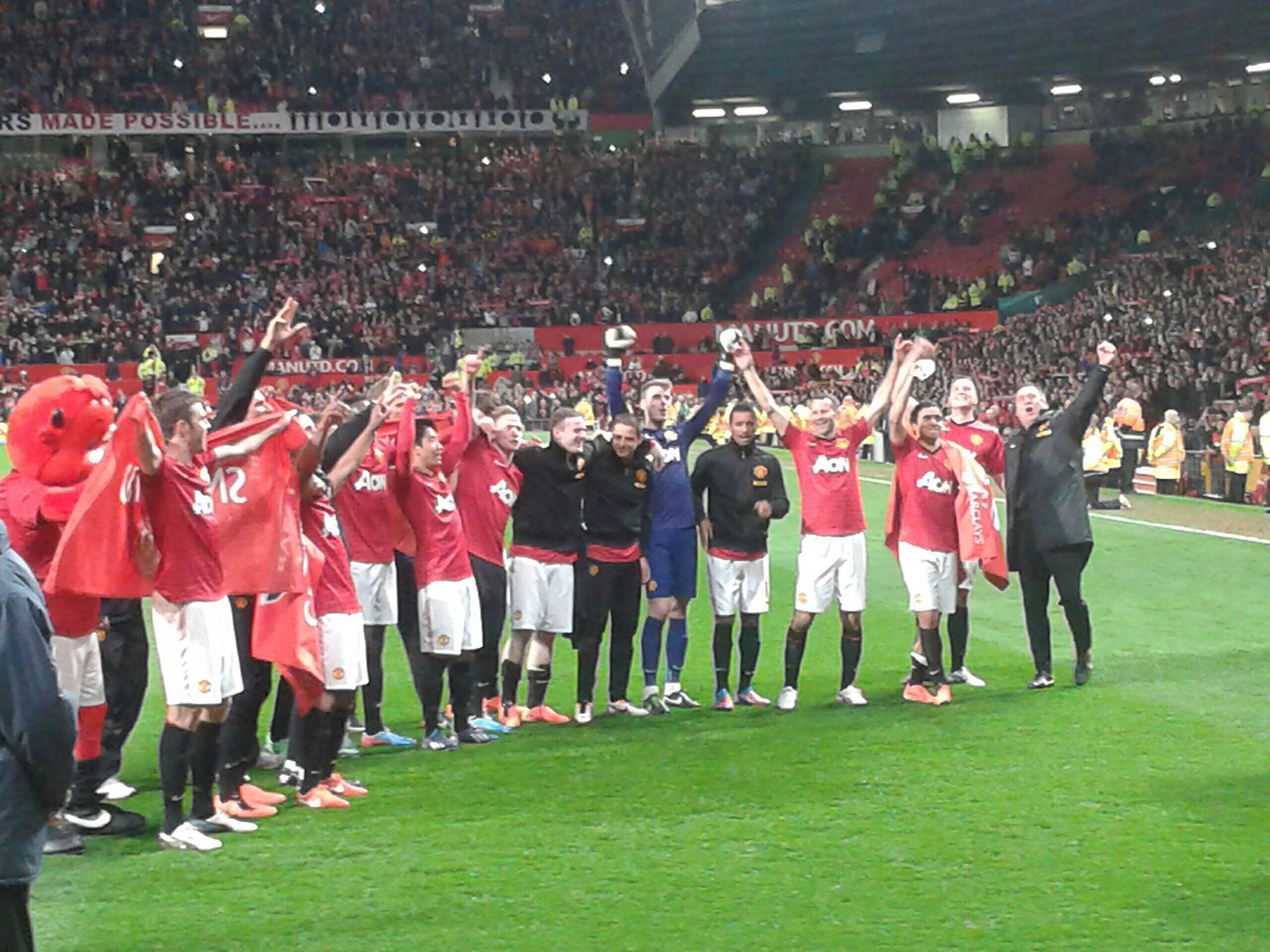 United tonight had the decency to not have us twitching desperately for a last minute winner. Within eighty six seconds, United were a goal up after Ryan Giggs found Robin Van Persie on the far post for him to put the ball into an unguarded net. Robin Van Persie tonight became the first United player since Jack Rowley against Arsenal in April 1952, to score a hat trick to seal the title for the reds. He has now surpassed Luis “jaws” Suarez as leading goalscorer, something that after yesterday events, is unlikely to be changed.

Ten minutes later, Wayne Rooney again played a pass that David Beckham would’ve been proud of to set Van Persie up for a volley to make the score 2-0 for United. The first time the ball hit the deck in the Villa half was when it come off the back of the Aston Villa net after Van Persie’s amazing finish. Twenty minutes after, Ryan Giggs unselfishly played Van Persie into make it 3-0 and game over before half time. The second half performance from United was sloppy, but who cares. United are champions again and it’s a moment to treasure. Three times tonight, The classic song from The Courteeners Not Nineteen Forever blared over the Old Trafford tannoy. A song written by Liam Fray, a genuine red and not some fraudulent wannabe like his blue near namesake from bloody eye, I bet he never in his wildest dreams thought his song would be playing over the Old Trafford tannoy in the context that it was tonight