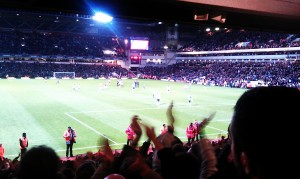 In the run up to tonight’s match at the Boleyn Ground, there was nothing like the anxiety which hung thick in the air before the Stoke City match last Sunday. There was a calm confidence amongst reds walking down Barking Road tonight as United were readying to play a side who haven’t beaten them in the league since December 2007. Unlike the pathetic Stoke side though, West Ham were, unsurprisingly up for this game. In the 16th minute, West Ham went 1-0 in front with a goal from Portuguese forward Ricardo Vaz Tê on the counter attack who diverted an Andy Carroll header into the net. Fifteen minutes later, United equalised after brilliant work from an unflappable Shinji Kagawa found Antonio Valencia unmarked for him to score his first goal since that belter at Ewood Park just over a year ago. Valencia seemed to grow two inches after that goal. Suddenly, he was hungry and confident buzzing all around the pitch and resembling the player he was last season when he was the supporters player of the season. Valencia isn’t quiet back to his best yet but the signs tonight were promising after a very stop start season (mostly stop) from the popular Ecuadorian winger. Just before half time, Andy Carroll came in on David De Gea like a revved up carthorse which when all is said and done, is all he is. I saw this last season at Anfield in the FA Cup match where Carroll terrorised De Gea and caused Liverpool’s first goal in that match by legitimately hassling De Gea. What Carroll did tonight though was outrageous, it looked like Peter McPartlands infamous attack on Ray Wood in the 1957 FA Cup final between United and Aston Villa. Everytime I see Carroll play football, I piss myself laughing that Liverpool paid £35,000,000 for him. That’s £11,000,000 more than United paid Arsenal for Robin Van Persie and only £3,000,000 less than City paid for Sergio Aguero. If I find it incredible that Kenny Dalglish thought he was worth that much, Mike Ashley at Newcastle must still be pinching himself in disbelief that he got that amount of money for a modern day Vinnie Jones. One great thing to come out of both tonight and last Sunday is seeing the increasing confidence and assertion of David De Gea. A year or so ago, coming up against somebody like Andy Carroll visibly rattled him, now he’s got that big lumps measure and is no longer intimidated by him.

Ten minutes into the second half, Mohamed Diame scored a belter from eighteen yards past an unsighted David De Gea. Former Bolton goalkeeper and perenial Sam Allardyce favourite ,Jussi Jääskeläinen, suddenly looked like he was going to have the kind of game that Brad Friedel is famous for having against United. He produced two great saves from Robin Van Persie and when Wayne Rooney finally did beat him from a Robin Van Persie corner, Gary O’Neill cleared Rooney’s fumbled shot off the line. It was begining to look like one of them nights. On 75 minutes, at exactly the same point in the second half as the first, Shinji Kagawa intervened agin with a stroke of magic to help rescue the match. Kagawa hit both posts before Robin Van Persie ran up to score for the second match in succession, in an unguarded net from what I later found out to be from an offside position. If you would’ve offered reds four points from these last two games after the derby nine days ago, most of us would’ve been delighted with it. As it stands, United now need six points to be sure of winning the title and that’s based on the assumption that City win every game between now and the season end. City won 1-0 tonight with a late goal from ex West Ham centre forward Carlos Tevez in what was a dress rehearsal for next months crassly timed FA Cup final. On Sunday, City are away at White Hart Lane playing a good Tottenham Hotspur side who are in serious contention for a European Cup spot. If City lose there then United have to beat Villa the following night at Old Trafford to seal the 20th league title.

A bloke who I swear could be Al Murray’s bastard brother was giving it the big one during the match. Inviting United fans to meet him outside the chicken run at half time, as if anybody’s gonna be daft enough to walk out at half time. He done one five minutes before the end of the game without even a whimper. A classic example now of what was once a genuinely moody place to visit. West Ham as an away trip has changed dramatically over the years, it’s now full of wannabe’s trying to live up to an exaggerated folklore. Walking down Green Street pre match, there were a plethora of local early 20 somethings walking around trying to look like a firm whilst the police were everywhere nearby. I can remember a time when West Ham’s boys would be mooching about well offside away from owe biww but these kids tonight were just poseurs. They would’ve been better off having an early night, going to bed and inducing a sleep the way young lads traditionally do for all the aura of menace they possessed. Tonight, was like being in a ground full of people that I am convinced cannot see the irony of ‘Til Death Do Us Part’ or the rantings of Alf Garnett. Is there really Life on Mars?

Thanks to Lee Thomas for his help in writing this blog