The front cover of the United Review for the Tottenham match set the memory bank running for this piece. A homage to the Pink Final which used to be sold outside Old Trafford and Maine Road, it was in reality a promotional tool for United’s ghastly new change strip, which made its debut at Turf Moor the following Sunday. As awful as the new away strip is, the piece itself was written with the good taste that the United Review editor has, a fine man who knows the score and is a time and travel served red. 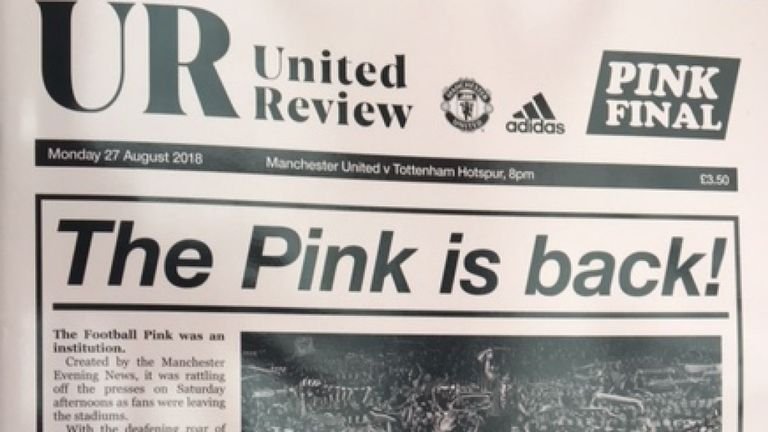 As people made their way out of Old Trafford and Maine Road in the dark Saturday nights of peak winter, they would be greeted with a cry of PINK FINAL, EVENING NEWS… on a loop, being bellowed out mostly by children but also the odd old timer too who would have been there earning a few pints of Mild for a his Saturday night at the local legion. What mostly happened would be young blues working Old Trafford and young reds working Maine Road, earning the money to pay on the turnstiles for their side’s next home game. 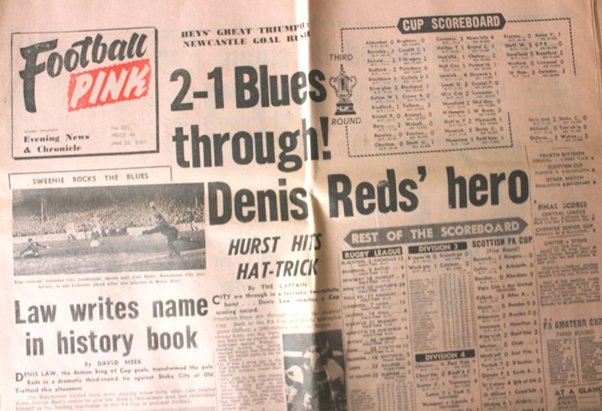 As a 12 year old red, I worked Maine Road on a regular basis and my lord, 33 years later, I can tell you that bitter is the perfect word to encapsulate the clientele that populated that stadium in those days. There’s a real pathetic fallacy to reminiscing about cold and wet winter nights outside Maine Road during the mid to late 1980s. 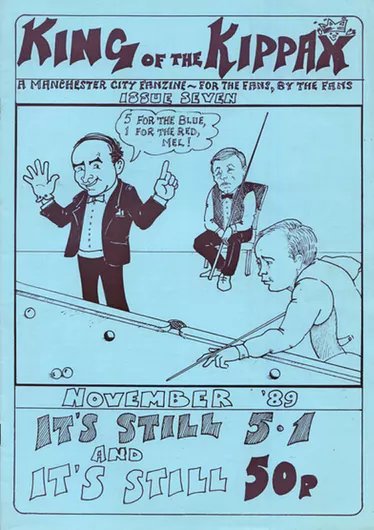 For the in, we’d be selling the Saturday edition of the Manchester Evening News, which would’ve been printed at nine o’clock that morning. It always amazed me how many people would buy the Evening News before the game as Saturday’s edition was notorious for not having anything of interest in it. I can only assume the City programme was really shit. This was the era prior to fanzine explosion of the late eighties. All said however, if you ever had the misfortune to attempt to read King of the Kippax or Electric Blue fanzine, well…I take back everything I previously said about Saturday’s MEN.

The boss had fag ash grey curly hair, a grey moustache with nicotine stains around the philtrum and he clearly fancied himself as a modern day Bill Sikes. Fair play to him, there was no false niceties. Having been introduced to him, he said “put that coat on, there’s a bag, pick up the papers and fuck off out of here. You’re on 10p per paper sold”. We were given these huge MEN emblazoned yellow coats, which bearing in mind the ages of the kids selling these papers, was like walking around with a duvet wrapped around us. Worse still, they absorbed the rain, so by the time we finished our shift, we’d be fucking drenched. 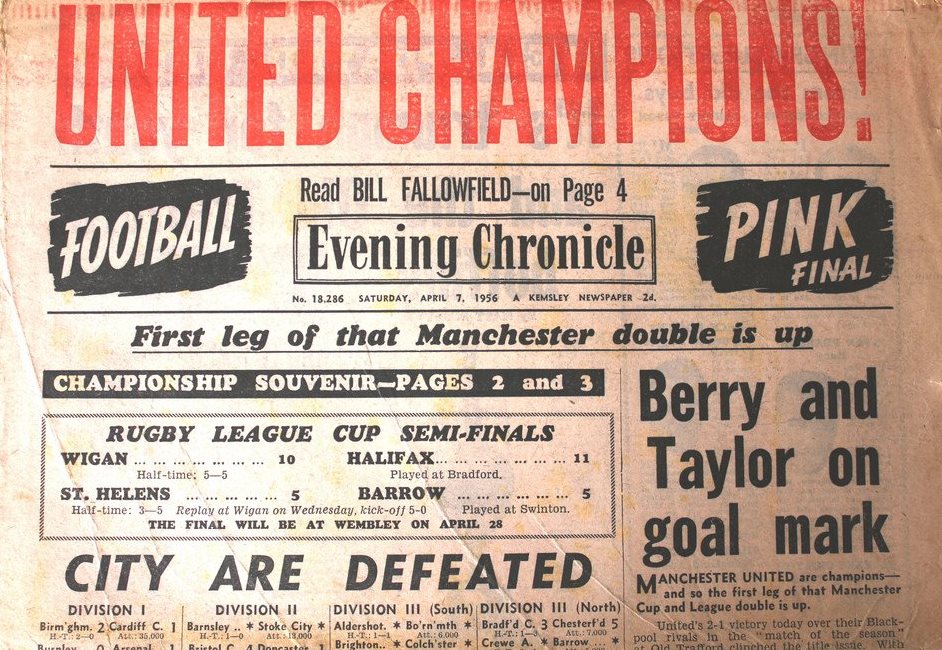 My first day was Man City/Birmingham City on 28th December 1985. Our base was a yellow and black striped truck which looked like an enormous wasp, parked outside the City Social club near Claremont Road. This truck housed the papers, the small printing press and bench where the sellers sat and smoked throughout the game. 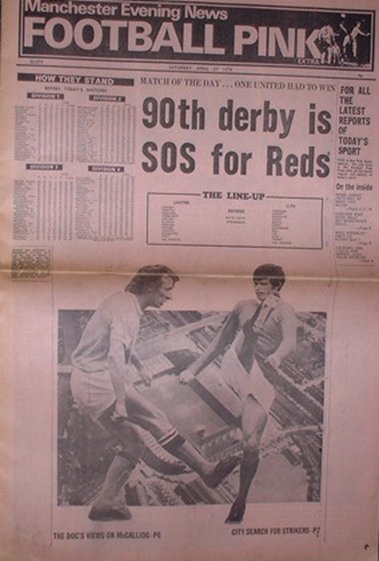 A couple of minutes after I walked out, I had another seller come up to me. He must’ve been 14/15 and he demanded that I buy a paper off him. I told him to fuck off, so he came up to me, put his forehead to mine to try and intimidate me. I didn’t back off. I’d dealt with far worse than this chancer in my school playground and the street I lived on. Once this prick realised I wasn’t scared of him, he tried becoming my friend, but I was having none of it.

I was roaming around, oblivious to pitches that certain sellers had, however my blissful ignorance was about to be corrected as I walked towards the players entrance at the Platt Lane end of the Main Stand of Maine Road. A man with a woodbine in his mouth and an MEN coat on greeted me by saying, “move away from here you little cunt. I’ve been working this pitch since 1959, I’m not having a little twat like you taking my punters”. By this point, I’d not been in the job any more than an hour and I can safely say three decades on, that I have never had an introduction to a job quite like it. 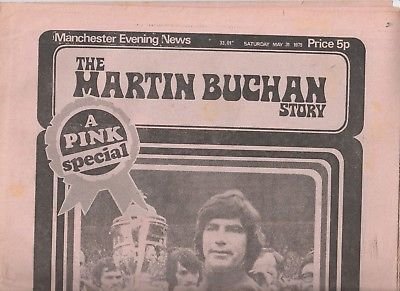 People used to wonder how the results would be on the paper before the referee blew the final whistle in the match they were at. What happened was that there was a tiny section of the paper which was left blank and the latest scores (conveyed courtesy of the much missed Peter Jones at Radio 2) would be printed onto them with 10 minutes of the match to go. If a late goal went in somewhere, then that would obviously affect the accuracy. Truth is, nobody seemed to mind. They would walk out of the ground with something to read on the way home or to the pub and sixty minute match reports phoned in by David Meek, Peter Gardner, Paul Hince et al as well as a roundup of semi pro and amateur/pub football around Manchester. Us kids working the paper at Maine Road, we’d generally earn between £4.50/£6.00 a day during the winter and as the weather perked up in the spring, nearer £7.00. This might not sound a lot, but in those days a weekly paper round paid £6.00 (inclusive of a £1.50 premium for Sundays), so you could effectively earn enough money in a day at Maine Road than you could in a week getting up at 6am every morning to walk two miles delivering papers. 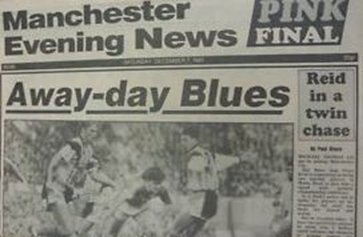 I eventually settled into a pitch at Maine Road. The Paddock between the Platt Lane and Kippax stands became where I usually worked. I even struck up a friendly rapport with some regular punters who by blue standards, actually had something approaching a pleasant disposition (don’t faint, they do exist) and I generally enjoyed the three years I spent working at Maine Road, before I graduated into becoming an away as well as home red. Modern technology has made things like the Pink obsolete, even if there are rather quaint if financially insane ideas to bring it back. One thing working the Pink did provide was a grounding which can’t be bought and I wouldn’t change a thing about it (apart from the weather, that really could fuck off) 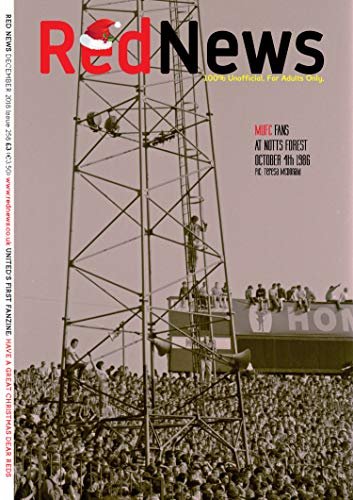 Originally published in the September 2016 edition of Red News fanzine. Written by the fans, for the fans, subscribe to Red News here http://www.rednews.co.uk/subscription.php

8 thoughts on “Return Of The Pink Paper”