In the summer of 2013, United were linked with, amongst many others, Cristiano Ronaldo (The Guardian), Gareth Bale (Irish Independent) and Cesc Fabregas (The Guardian). Instead of those three, Woodward ended up in a blind panic paying Everton £27.5m for the hapless Marouane Fellaini. That’s four million pound more than he could have paid a few weeks earlier if he had activated Fellaini’s “escape clause” from Everton before it expired. It is rumoured that Bill Kenwright has only just stopped laughing after last Summer’s dealings. The less said about the bid for Leighton Baines, the better. Perhaps Woodward’s biggest difficulty is that though he may be a good Hardy, he has no Laurel beside him.

@ManUtdfansblog This menacing firm spotted plotted up on the forecourt. Tooled up, with chopsticks. #RMUshanghaifirm pic.twitter.com/ss9LFOUHMw

Despite Ed Woodward’s comedic performance in his job, there is, for the second consecutive season, a tentative optimism around Old Trafford. Last Summer’s caution was due to the fact that despite United winning the title by eleven points the previous season, a phenomenally successful manager who had been incumbent for twenty six years had just retired. Nobody really knew how David Moyes would cope but with him being at Goodison Park for the previous eleven years, he certainly had a reputation for stability. We were all hoping he could just pick up the baton and move on with relative serenity. Maybe lift a cup and attain Champions’ League qualification.

In the end Moyes won the Community Shield. Nobody in their wildest imagination foresaw what was coming. For all of Moyes’ previous stability, we now have Aloysius Paulus Maria van Gaal in the manager’s seat; a decorated manager who created that fantastic Ajax side of the mid-1990s. Louis Van Gaal (as he’s more popularly known) has also won the league title with four different teams in three different countries. Van Gaal is notoriously a man who doesn’t suffer fools and he’s also an orator who knows how to whip up fans of his own club (see below). Hopefully he will also shift some of the now odorous deadwood that is hanging around the United squad.

Louis van Gaal at the Bayern Munich trophy parade in 2010

Whatever Marounae Fellaini’s failings are, what he neither needed nor deserved was the ironic applause or the booing that greeted his cameo against Valencia. It was nice, for what it was worth that Fellaini ended up scoring a last minute winner against the Spanish opposition. Fellaini has not been a good signing for United but he hasn’t, to my knowledge, been deliberately shit. I can never comprehend the logic or mentality of people booing players that play for their own side. In my thirty four years of watching United, I can say with confidence that I have never seen a player perform better due to it. There has been a lot of speculation recently that Fellaini could be joining up with Rafael Benitez at Naples in Southern Italy. If that goal is the last thing he does in a United shirt, then at least he signed off with something to temporarily shut the miserable bastards up.

With only 18,000 City fans at the Community Shield, Blues were true to their reputation of meticulous observation of the Sabbath. This was revealed by “King Of The Kippax” Editor Dave Wallace when he explained away 20,000 empty seats for a 5th round match against Notts County in 2011 by saying “Churchgoers would have found it tricky to get to the ground in time for a 2pm Sunday kick-off as well”.

Truth be told though, City winning the title was no great upheaval. The nightmare scenario occurred two years ago but it was mitigated by the fact that (a) City deserved to win the league that season and (b) Liam Gallagher didn’t make good on his threat to move back to Manchester should City win the title. This year, if anything, has been far easier. Any realistic chance United had of winning the title last season disappeared while the Christmas turkeys were still alive. We watched in tense horror as it became increasingly apparent that Liverpool were going to win the title. I remember talking to a Scouse taxi driver on the way back from Goodison Park to Lime Street the day before Moyes was sacked; we were talking about Liverpool’s forthcoming coronation like it was a fait accompli and then this happened…

Thank you City for seizing the title from this, it has made the Summer far more bearable

To date, United have signed Ander Herrera and Luke Shaw for a net spend of £47.7m. Herrera has looked good up to now and the eighteen year old Shaw, who was described by Van Gaal in late July as not very fit has just been ruled out for a month with a pulled hamstring. Talk of £100/200m budgets that were widely bandied about in the media at the conclusion of last season are, as expected to anybody with a brain, well wide of the mark. In July 2013, Ed Woodward abruptly left Sydney to deal with what The Guardian described as urgent transfer business. United signed Marounne Fellani five weeks later. This summer, Ed Woodward left the United States for general business reasons. God forbid that would be to sign a new player but worry not, I have no doubt that soon we’ll all be applauding the arrival of an official Japanese sushi manufacturer as an official raw fishi provider to United.

United might not have (to date) spent anything like the money that we all know is required to rebuild and structure the team but, worry not, the good news is that the Glazers have actually received more in share sales this summer than have been spent on players. United at the time of writing have an estimated debt £350m and the Glazers, who Sir Alex Ferguson described as great owners, have pocketed £89m from a share issue this summer. Has that money gone towards new players or maybe gone towards reducing the debt burden? Don’t be silly, the Glazers have kept that money for themselves. 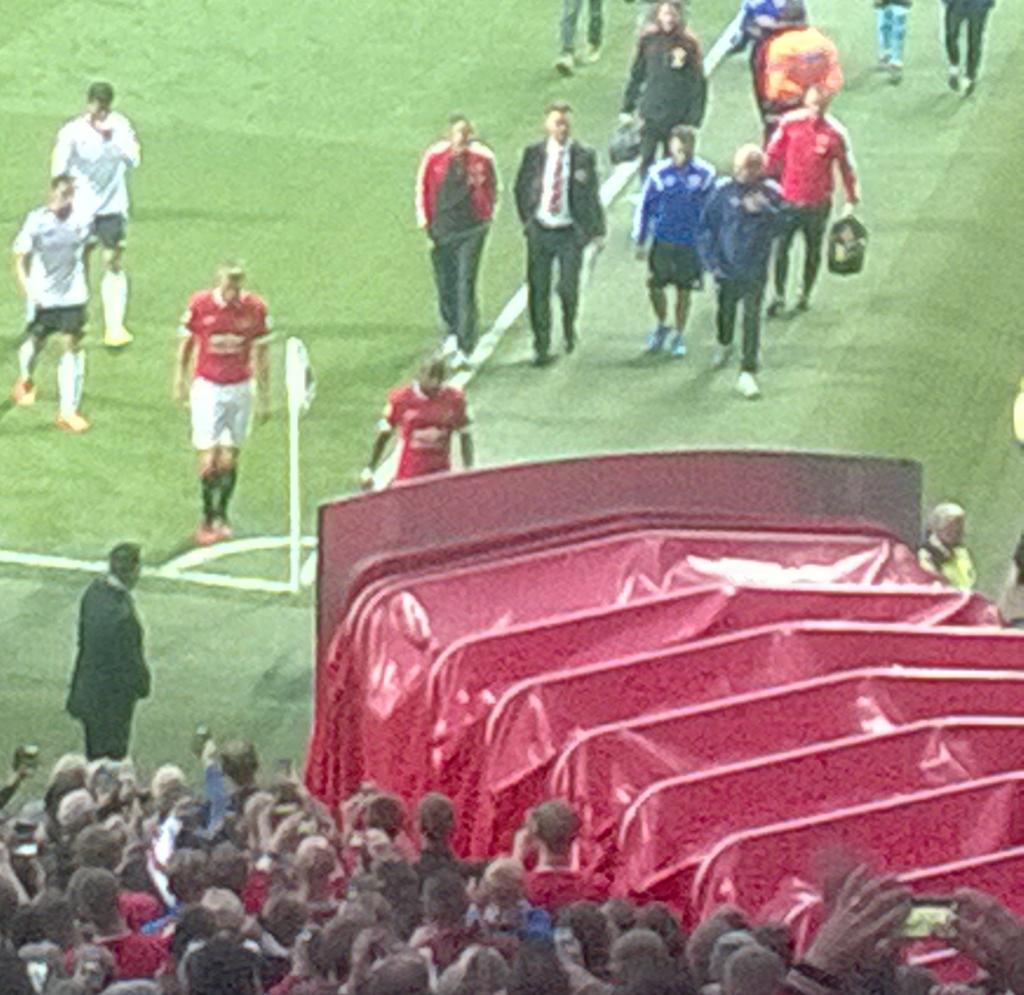 It’s hard to say what will constitute a successful season this time around. People want a full on challenge for the title (don’t we all) but realistically, European Cup qualification and a cup will have most old school United fans happy and hopefully some of the younger ones too. There’s still a period of transition going on out there but United have definitely been helped by a far less strenuous start to the season than the one David Moyes was gifted last year.

Whatever happens, last season was, for all the dross on the pitch, one of the best ones I’ve had in recent times with away matches and the craic with the lads ‘n’ lasses on the road and around Old Trafford. There will be plenty more this season, especially with Louis van Gaal providing entertainment off the pitch as well as hopefully on it too. For that reason alone, it’s great to be back. Happy new season.