In the first half, there was plenty of United possession and whilst West Brom defended well, it felt like it was only a matter of time before United scored. On 24 minutes, a free header for Wayne Rooney went straight onto the grateful hands of West Brom keeper Boaz Myhill and Javier Hernandez went agonisingly close from a Nani cross. At half time, David Moyes replaced Shinji Kagawa with the promising Adnan Januzaj but while there was only one change in personnel, he might as well have changed the entire side at half time such was the lack of confidence in them in the second half. With West Brom winning at Old Trafford today for the first time since the Christmas period of 1978 and being good value for it too, todays performance will be remembered as being disastrous or ‘fuckin’ shit’ as most people around me were muttering at the full time whistle. United played alright in the first half but were run ragged by in the second half by an enboldened West Brom side who were relieved to have gone into half time at 0-0. There was no apparent danger on 54 minutes when Morgan Amalfitano took possesion in his own half and ran in the general direction of the United goal. Seconds later to the disbelief of everybody in the ground, he was ono-on-one with David De Gea having strolled through half the pitch without a single fucking challenge being made on him (the Ferdinand nutmeg don’t count!!). His finish, dummying a stranded De Gea before dinking the ball over the commited and blameless United keeper was exquisite.

If there was bright thing to emerge from that goal, it was the confidence that United would now wake up, stop pissing about and grab the game by the scruff of the neck. Three minutes later, Wayne Rooney equalised with a free kick that was a carbon copy of the goal he scored against Chelsea in the FA Cup quarter final last March. There was an expectancy that United would now take control of the game and win. The belief was that West Brom would sit back and forlornly attempt to absorb an onslaught with United being comfortable winners. Bollocks to that, West Brom carried on playing with more balls than I’ve ever seen from their side before. Prior to their deserved winner ten minutes after Rooney’s equaliser, Jonas Olsson hit the bar with a downward bouncing header and Morgan Amalfitano forced a fantastic save from De Gea, almost immediately before Saido Berahino hit a brilliant winner, low to the left of a mostly blinded United keeper. United looked flattened after that goal. Marouane Fellaini came on and replaced Anderson immediately after the West Brom winner. Fair play to Anderson, he lasted eight minutes longer than he normally does, he had an improved game compared to his last appearance and did hit the bar in the first half with a header (even if he was offside). Fellaini gave a bit of bite to a toothless United but it was too little too late. On 86 minutes, to the relief of the anguished home crowd who’d not walked out of the ground, Fellaini had the ball in the back of the Stretford End net. To the howling horror of United fans, referee Michael Oliver disallowed the for offside. A decision that having seen later on the television, was a correct one. The possesion stats and attempts on goal all point to an unlucky defeat for United. Not a bit of it, this was a disciplined, gutsy and well deserved win for West Brom.

The knives are already sharpening for David Moyes but I believe he should be cut a lot more slack from United fans, especially reds over the age of 35 who will remember the awful football that was on show in the late 1980’s (barring the regular wins over a brilliant Liverpool team). David Moyes has inherited a title winning side that was obviously in decline. It was a side who won the title last season against everbody’s expectations in the summer of 2012, marshalled brilliantly one last time by his predecessor. There’s a lot of deadwood at Old Trafford and in this summer transfer window, United only signed Marouane Fellaini. You can’t employ a manager to replace a man like Sir Alex Ferguson and expect a seamless transition. Knee jerk sackings of managers happen at other clubs, not at United. If the United board reacted to the hysteria of the terraces in the winter of 1989 after THREE YEARS incumbent, Ferguson would’ve been sacked that Christmas. Moyes hasn’t even been in-situ for three months! At the time of writing, Manchester City are 9/4 favourites with the bookies to win the title. That’s the same City side who blitzed United last weekend but have also lost at Cardiff City and Aston Villa, not places that title winning teams should be losing at in a short space of time, especially so early in the season. This seasons title race is probably the most open since the mid 1980’s. Predicting the title winners is like shooting fish in a barrel. A lot of reds are already writing United off for the title but United are eight points behind the leaders and we’re not in October yet. United have recovered far bigger deficits than this at a later stage of the season, just ask any Geordie over the age of twenty five if you can get him to put his kleenex down long enough to answer you about that one. 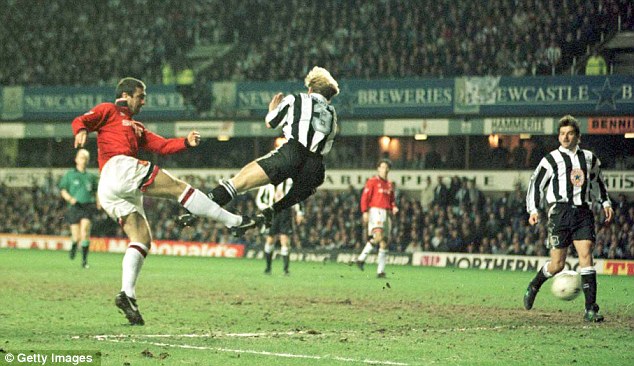