Last Saturday, West Bromwich Albion beat United in a league game for the first time since March 1984. At half time yesterday, Sunderland looked like exorcising another long standing hoodoo when they were winning 1-0 and looking good for their first league win against United since March 1997. Three minutes after Sunderland went into the lead in the fourth minute, Craig Gardner robbed possesion off Phil Jones in the midfield. If Gardner had been more decisive in possesion, United would have been 2-0 down before they’d even realised the game had kicked off. Emanuele Giaccherini forced a brilliant save from David De Gea in the 34th minute. Ten minutes later, Giaccherini shot high from six yards when it was probably easier to shoot on target. Apart from a volley from Nani on 21 minutes, which he fired across goal, United never looked threatening. The second half began nearly as badly as the first, on 48 minutes, Adnan Januzaj was booked for a dive in the Sunderland eighteen yard box. Having seen it again on Match of the Day, it was that poor a dive as to make Ashley Young’s recent efforts look convincing. Seven minutes later, Januzaj redeemed himself by calmly sidefooting Patrice Evra’s low cross from twelve yards, past a stranded Kieron Westwood. On 62 minutes, Januzaj scored the winner with a brilliant volley, low into Westwood’s bottom right hand corner from eighteen yards. After Uniteds erratic start to the season, todays result gives me great confidence that United will be playing Premier League football next season.

Former Sunderland manager Martin O’Neill is no friend of visiting supporters to the clubs he manages. When at Aston Villa, he arranged for the travelling support to be moved from the lower part of the Witton End, historically the domain of away fans at Villa Park, to the Witton Lane stand. This was intended to give the prominent seats in the ground to the home supporters so they could create a better atmosphere for their side, something Aston Villa fans are notoriously poor for. O’Neill decreed the same thing to happen at Sunderland. United fans have for the last couple of seasons, been stuck in the upper tier of the North Stand at the Stadium of Light. On a day like yesterday though, it doesn’t matter where you place the away fans. The travelling support for United was immense. Instead of the Johnny come latelys and potential clients of execs polluting the away end, like they do at Anfield and the tripe colony, this was an away trip for proper reds, of varying accents, and the difference was stark. I didn’t see a single half ‘n’ half scarf, just lads and lasses relentlessly supporting the lads on the pitch, the way it should be. When Craig Gardener scored the comical opening goal on four minutes, the United calypso carried on without a pause of breath. The relief which greeted Adnan Januzaj’s equaliser was manic but surpassed by the rampant gleeful insanity which greeted the winner. This was the biggest celebration since Robin Van Persie’s last minute goal caused pandemonium at the Commonwealth stadium last December. As for the home support, after the ridiculous amount of injury time was announced, I was waiting for the fabled rousing Roker roar from the self proclaimed loyalist fans in the world. Maybe there would have been one if the makems hadn’t spilled out of the ground like hot sauce out of a plastic bottle while their team was chasing a one goal deficit before the five added minutes were granted (five minutes for fucks sake??). I couldn’t believe my eyes as the ground emptied rapidly in the early stages of injury time. Maybe if Sunderland were losing by more than one goal, I could understand the enthusiasm of the locals to vamoose, even if I don’t agree with it. But to leave the ground en masse when chasing a goal? If that is a demonstration of loyalty, then I’m happy to be and to be seen to be, the polar opposite.

Bouncing away end at Sunderland (photograph courtesy of Stuart Gwilliam)

It could be said that we shouldn’t get too excited by beating the bottom placed team who are playing with a stand in manager and have yet to win a match this season. On the surface of dry facts, that opinion is a valid one but United have now enticed the best performances of the season from three of our opponents in Manchester City, West Brom and yesterdays opponents. To add to that, United had a flight back from the Donetsk in the midweek and then had to play away at Sunderland, not the most forgiving of places or opposition after a journey like that. It wasn’t the best of United performances but there was a euphoria amongst reds walking by the River Wear after the match, that maybe United had turned the corner after an unpredictable start. Time will tell as to whether that was an accurate feeling or not. With the good momentum gained from Wednesday’s excellent draw Shakhtar Donetsk and yesterday’s result, the last thing that is needed now is an international break, but that’s what we’ve got. Next up is Southampton at Old Trafford in two weeks, a Saturday afternoon kick off at three o’clock no less. I could happily get used to that. 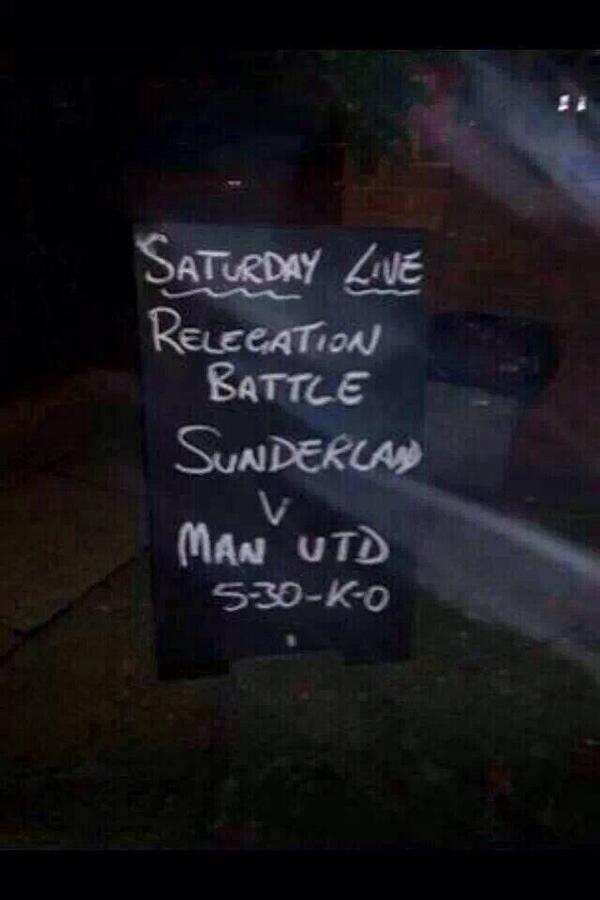 Thanks to Lee Thomas for sorting the tickets out, the RI/UWS monkey bus for another fantastic day out and to Stuart Gwilliam for the photgraphs inside the ground