Another twitchy win for United and suddenly, out of nowhere, the crisis club of a fortnight ago are in the top four. Nobody is daft enough to think United are going to sweep all before them (at least I hope not anyway) but this was a very good win today. Everton are the best side United have faced this season in what was, on paper, a very benevolent start. Everton could’ve got a draw, maybe should’ve done and for the brilliance of David De Gea, who had an absolute blinder, probably would’ve done.

A mid-day kick off on a Sunday is a pain in the arse for most people. Circumstances dictated that because Everton were in Krasnodar on Thursday night, people were walking down Warwick Road bleary eyed, hungover or just plain bemused. At one point, we had Dutch Reds walking there, singing the twenty times song (to the melody of Give Me Joy In In my Heart) and to these ears, they all sounded like Steve McLaren on the karaoke. Apart from that, the build up to the match was as low key as you would imagine for that time of day on a Sunday. I had a feeling that there were a good few Reds who were just as religious as City fans, and left it as late as possible to get to the match. Unlike our beloved neighbours though, Reds did actually managed to get into the stadium having been to church…

Any excuse to put this video up

It was a cagey opening to the game, becoming more memorable for referee Kevin Friend throwing yellow cards around like confetti. This cautious start was breached with a brilliantly taken goal from Angel di Maria in the 27th minute. In first half injury time, Everton were given a penalty that, on first look where I was in the stadium, looked a very generous decision. Having seen the replay on the television, I can now say that Friend called it right. De Gea made the first of his four amazing today saves from Leighton Baines resulting penalty. This would’ve given Everton great momentum going into half time.

David De Gea saving Leighton Baines penalty in first half injury time. As seen from my seat in the B Stand

Radamel Falcao scored a winner in the 55th minute that was just as crucial for him as it was for United. Everton, up to that point, were playing very well and looking more likely to score. This was no fifth goal in a 6-0 win. Prior to that, there was whispered anxiety around the terraces of how much he needed a goal. He dithered on a good chance just before his goal and there was a suppressed groan around me. The sense of relief at Falcao’s goal was immense. We’ve seen proven and quality forwards struggle at Old Trafford before. Nearly all of us remember Diego Forlan and some people of a certain vintage will remember Garry Birtles, a lad who couldn’t stop scoring before he joined United from Nottingham Forest. The longer Falcao went without a goal, the more pressure would’ve built on him (witness Mario Balotelli now at Liverpool). For his winning goal, from my angle, Falcao looked offside. As per the penalty decision and having seen it back on the television, the referee/linesman got it right and the relief around the ground was palpable. The reaction of the Everton fans to my right hand side was telling. They were absolutely gutted. They obviously sensed something that nobody with a Red allegiance in Old Trafford was taking for granted. You would’ve thought United had scored an injury time winner looking at their faces and not with the best part of half an hour to play.

Everton fans were their usual selves. Impressively loud when the mood took them but otherwise silent. When Everton equalised with a free header from Steven Naismith after a Leighton Baines’ cross, there was a nervous uncertainty around me as Everton took control of the game. Four minutes later, Phil Jagielka headed goalward and we were resigned to United chasing a deficit again. Radamel Falcao made an unexpected contribution to saving United’s arse by stopping it on the line. 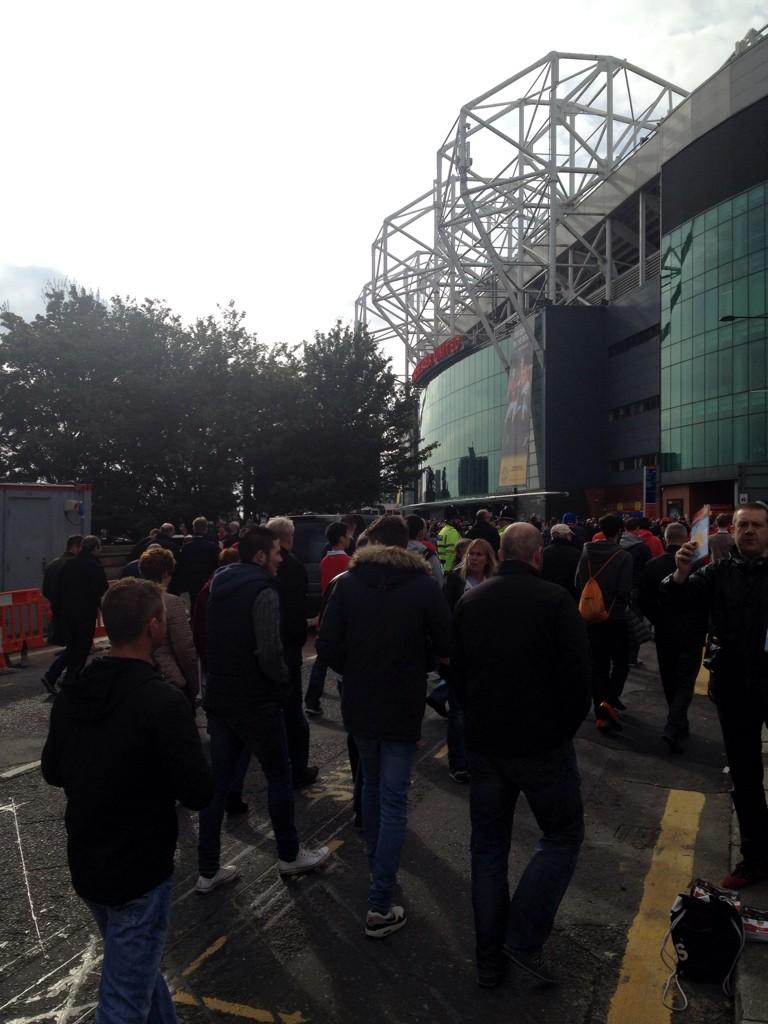 One thing I’ll give the Everton fans is that whatever dislike they have of United, it is their own dislike and not some pathetic generic (You don’t come from Manchester/we support our local team ad nauseum) that fans of virtually every other club who visit Old Trafford bore us with. Whilst Everton fans are not exactly fans of United, the fact that United are twenty times champions, as opposed to their neighbours’ eighteen means that they look on us in a far more favourable light than they did in say 1992 (at that time, they’d won the title two more times than United). Everton fans seem to adopt the attitude that an enemy of the enemy is a friend of ours to United. If nothing else, it keeps an uneasy peace on the streets when United play them. It’s not always been that way… 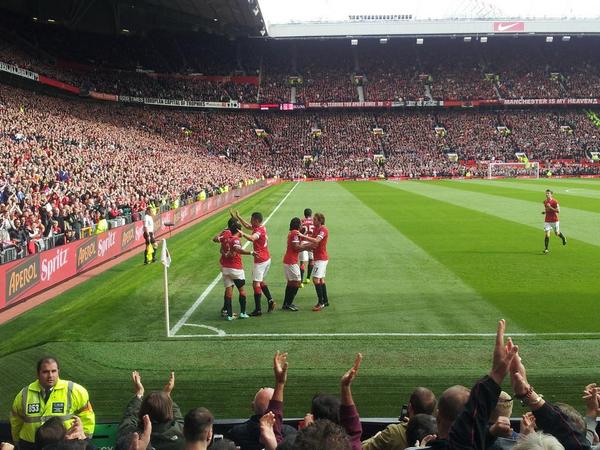