I believe that a lot of people have been a bit hasty this season in writing Giggs’s professional obituary. It’s plain obvious that he’s not going to have the same turn of pace as a youth but he’s not had that turn for at least four years. He’s played a couple of bad games this season, against Norwich and Tottenham in particular, but he was also outstanding against a full strength side who happen to be European Champions in a League Cup match just under two months ago. When Giggs has a bad game now, people seem to think it is because he’s past it and are falling over themselves to write him off. When he had bad games twenty years ago and trust me, he did, it was quickly forgotten about. That he’s now a cameo player who might start the odd game is a given but after what I saw today, Giggs is still an asset to United’s squad when used in the right way. That United didn’t win today when Giggs was brought on was not down to him. He provided more menace to United’s attack than Valencia, Young and Rooney did combined all afternoon.

Before kick off today and having looked at the forthcoming fixtures, I was thinking that a draw wouldn’t be a bad result. Having watched the game, I’m now bitterly disappointed that United didn’t win. Swansea have, since they were promoted in May 2011, exceeded all expectations amongst people who watch football. Brendan Rogers managed them well last season and had them playing good football until he decided to take a step down in his career and become the manager of the League Cup Champions (© Glen Johnson) in the Summer just passed. During that same period, Swansea enticed the legendary Michael Laudrup to continue the good work that was started by Roberto Martinez in 2007 and continued by the now Liverpool manager. This season, Swansea have beaten Liverpool at Anfield, Arsenal at Ashburton Grove and held Chelsea to a draw at home. Last season, they beat eventual champions City at home with a goal which kept the city of Swansea safe from drought for the forthcoming Summer due to City fans crying. Swansea are clearly not going to be written off as cannon fodder. All said, barring a ten minute spell after Swansea equalised, they applied no pressure whatsoever to United. The most telling thing was towards the end of the match when they were playing for time near the corner flag when drawing. I never want to see a United side doing that when drawing a game unless it’s the last minute in a European match and United are going through on away goals. Swansea stole a point today and I don’t begrudge them that. I’m more annoyed at the incoherence of United’s attacking play and the dreadful refereeing decisions which cost United today, both involving Robin Van Persie. When writing this blog, I try not to get too hypercritical of referees; they have a hard job and only a split second to make a decision that most people in their houses see in multiple angled slow motion action replays and watch them getting slaughtered by pundits who really should know better. Then we get referees like today’s official, Michael Oliver. At 27, Oliver is by some distance the youngest referee in the Premier League and after that performance today, I’d be careful about putting him in charge of a game involving under 12s. Robin Van Persie was fouled on 27 minutes by Chico Flores in the run up to Swansea’s goal right under the nose of Oliver and was then booked in the 77th minute for having the ball booted into the back of his head at point blank distance by Swansea skipper Ashley Williams. 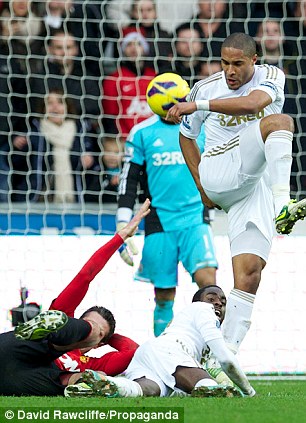 United took the lead on 17 minutes when full back Patrice Evra scored his third goal of the season to equal the amount of goals scored this season by Man City’s £24 million centre forward and scourge of school bullies, Mario Balotelli. We all know that United are vulnerable to conceding daft goals though and fifteen minutes later, Evra was caught badly out of position to give Jonathan de Guzmán a free shot at goal. David De Gea made a great save but could only parry the ball out to man of the moment, Michu, who calmly put the ball into a virtually unguarded net. For all the frustration of today’s result and performance, if you would have told me six weeks ago following the disgraceful showing against a staggeringly poor Norwich City side that United would be four points clear at Christmas, I wouldn’t have believed you. That’s obviously a positive. If United can tighten that defence up and stop conceding silly goals then the title is there to be won from a stuttering but stubborn and resilient City side. 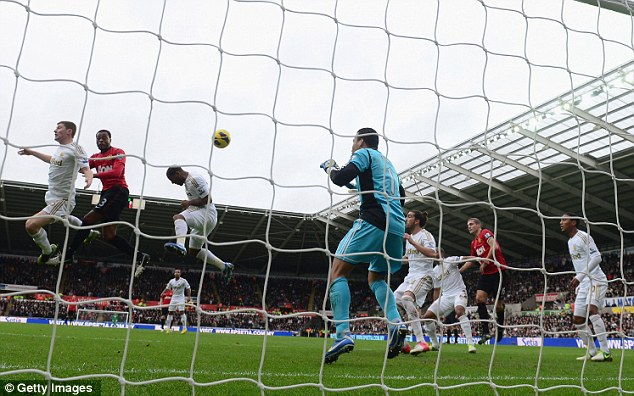 Patrice Evra heads United into the lead on 16 minutes