The return of club football couldn’t come a day too soon for United after the debacle in Athens. The meantime has seen United fans living through a mini silly season. A silly season which has seen Betty Boop, a Jack Russell from Ordsall who got trapped under a car bonnet, make the national news on the BBC. A silly season where a campaign which garnered over 17,000 signatures to get Tom Cleverley dropped by Roy Hodgson, also make national news. A bemused Roy Hodgson was asked about this petition, organised by Glenn McConnell, an Everton fan from the Liverpool district of Blackpool. A knock on result of this petition and Tom Cleverley’s admittedly erratic recent form, saw him roundly booed by a load of inbreds/ingerlund fans at a mass open sewer in North West London (alias Wembley). Reds at The Hawthorns were in a more conciliatory mood, recommending the much improved Maroune Fellaini for England.

This silly season started last week when the increasingly desperate Manchester Evening News attempted to make a story over United threatening to suspend a fans season ticket. This threat was due to his standing order bouncing for the return match against Olympiakos. The tone of the story was what an ogre United are. There was just a hint that United may not be the best when it comes to how they treat their supporters. Well there’s a revelation for you, here was me thinking that United were the model club when it came to supporter relations. In this instance, the Evening News were their usual dilligent selves; the scheme concerned only being introduced seven years ago. I predict that the next announcement from the Evening News will be the revelation that City have been taken over by a faction of the Abu Dhabi royal family. You read it here first. 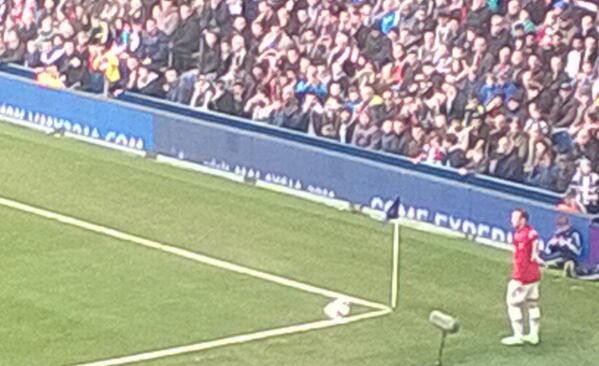 In a new book to be released soon that virtually nobody will buy, Sol Campbell has claimed that he “would have been the first-choice England captain for 10 years had he been white”. The FA were according to Campbell’s authorised bigraphy, which had been serialised in the Sunday Times, “institutionally racist”, My favourite quote came where Campbell said “Michael Owen was made a captain ahead of me. I thought: ‘What is going on here?’. That’s the Michael Owen who captained England a total of eight times in his entire career.

What is required of a captain is a player to cajole, encourage and bollock teammates as and when needed on the pitch. A leader of men who has the respect, though not necessarily the affection, of his teammates. People like Bryan Robson, Roy Keane, Tony Adams, Steven Gerrard, Jamie Carragher and Vincent Kompany are the model skippers. Sol Campbell, a fine centre half in his day, was no leader of men. In February 2006, Sol Campbell had a nightmare first half in a game between Arsenal and West Ham. Arsene Wenger substituted him at half time saying “I took him off because I felt that mentally he was too down to come back out”. Instead of watching the second half with his teammates, Campbell promptly walked out of Highbury and went incomunicado for four days. That’s why Campbell was never made a regular England captain. Campbell’s claim that he could’ve been England captain for ten years is also hilarious. He wasn’t even his club’s regular skipper during his original five year stint at Highbury, what made him think he could be his country’s skipper for ten?

The travelling Reds were, at times, in great voice yesterday and other times apparently gobsmacked by the glorious early March day. The pitiful repartee from the West Bromwich Albion fans next to the Reds in the Smethwick End didn’t help. For the first two United goals, West Bromwich fans, complete with screwed faces of faux hatred, were making half hearted attempts to get back past the cordon of stewards and coppers at the Smethwick End. Classic let me at ‘im posing behind the safety of a security line. What didn’t help was the mass amusement around me of Reds to the demeanour of the Danny Dyer clones amongst the home fans. If they had pierced that cordon, it would’ve got pwopah nowtay* for the Baggies. United fans, with the ever expanded repertoire of songs that would have Burt Bacharach nodding in admiration, eventually wheeled out the David De Gea song to the melody of Crowded House tune Weather With You. The more defiant We won’t win the league and we won’t win the cup, but we’re Man United and we don’t give a fuck (to the melody of Tom Hark by The Pirhanas) was also sung en masse before the old classic Where the brass bands play fuck off West Brom (to the tune of I do Like To Be Beside The Seaside) got an airing. After this performance from West Brom, United fans may just get their wish this Summer.

Last September, WBA came to Old Trafford and deservedly won. Anybody who remembers the match will know that United got off lightly losing 2-1. Since sacking Steve Clarke in December, West Brom have gone from relative stability to freefall. In a rare gesture, Match of The Day gleefully showed the events of last September before their coverage of the match commenced of yesterday’s match. It was the only joy any West Brom fan would have got out of the programme last night. That is of course assuming they watched it.

Looking at the rapidly emptying Hawthorns on 85 minutes yesterday, after Danny Welbeck’s exquisitely taken goal, I reckon most of the departing and deserting Baggies will have renounced the entire game of football before getting back to their houses – houses that are all within a mile of their weirdly configured stadium (they all support their **loawcuw team, you see). My betting is that there will be a plethora of bad rock bands with mullets and double necked guitars to emmanate from the area of Wist Brummidge*** within the next couple of years after this dose of true reality and their almost inevitable relegation occurs. 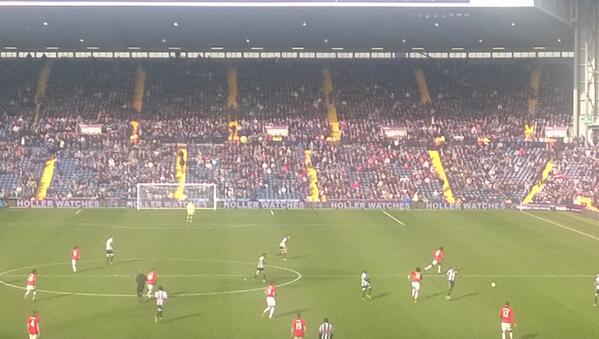 Prior to that late exodus into the glorious blick cuntroy**** sky, a Wayne Rooney pass in the 33rd minute, which reminded me of Paul Scholes, found Rafael on the right flank of the Smethwick End penalty area. Rafael drew a clumsy foul out West Brom skipper Chris Brunt. The resulting free kick saw Robin Van Persie whip in a better cross than any of our incumbent wingers could ever manage and Phil Jones ghosted in with a free header to score a classic centre half’s goal.

Robin Van Persie was booked in the 50th minute for a tackle from behind on Morgan Amalfitano. Five minutes later, Van Persie was adjudged to have fouled Steven Reid in virtually the same area of the pitch. With action replay, we can see he got the ball but in real time, it looked like a foul and worse, the type of foul that would get you booked. Awaiting the inevitable red card, a mass groan went up in the Smethwick End amongst United fans. Referee Jon Moss, whom up to then had invoked the ire of United fans a few times during the first half, atoned for some of his more eccentric decisions by not sending Van Persie off. In my eyes, Van Persie got out of jail there. Seven minutes later, David Moyes wisely replaced a clearly pissed off Van Persie with Danny Welbeck. Nobody wanted Van Perise to be substituted, but more importantly, nobody wanted Van Persie suspended for the forthcoming matches against Liverpool and City due to some stupid sending off.

Three minutes after Van Persie’s substitution, United’s second goal was scored with such an ease that I actually think West Brom’s defence were stood around like those wooden dummies that footballers train against when practising crosses and corners. A Juan Mata pass found Rafael on the right flank. The United right back’s cross found an unmarked Wayne Rooney who headed in possibly the easiest goal of his career.

In my opinion, this was United’s best performance of the season. It was bostin’. Not perfect, far from it, but after the shocker that was served up in Athens eleven days ago, this was United’s yang to the yin. Juan Mata showed some moments of calm class that we all know he has; as he gets more familiar with his new team mates, the better I expect him to get. The much maligned Maroune Fellaini had, by a mile, his best game for United. It maybe was against shite opposition but sometimes a performance like this can improve confidence and bring a player out of himself a little. With games against Liverpool, City and Olympiakos coming up very soon, we won’t have to wait long to find out if he has turned the corner. Here’s hoping. 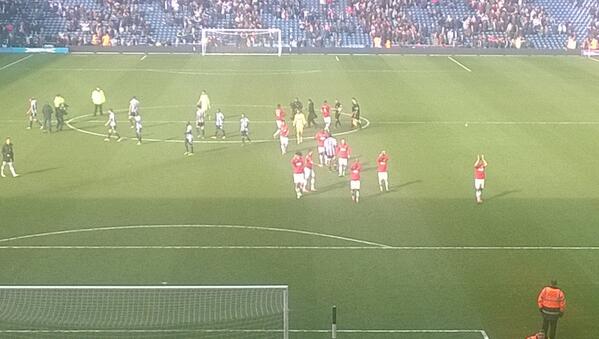 United players thank the fans after the full time whistle 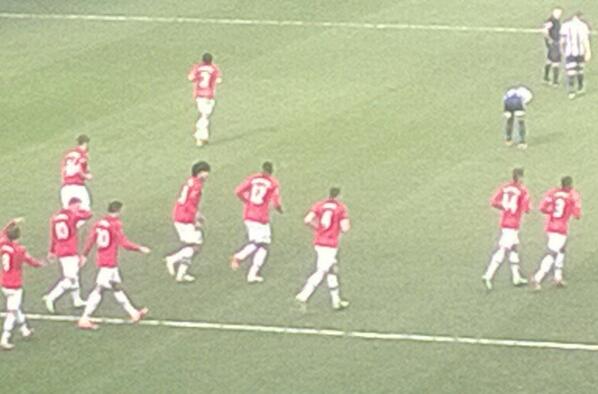 Since the last United match in Athens eleven days ago, three people whom are very dear to this writer have passed away. God Bless, Bernard Freeman, Christine Hope and Teresa McDonald. RIP