Another frustrating performance from United yielded probably the wildest celebrations of United fans for the best part of four weeks, after Daley Blind´s injury time equaliser at West Ham. With great initiative, Adnan Januzaj quickly taken throw fed Wayne Rooney on the right flank. On his own, Rooney caused chaos amongst five Newcastle players, ultimately causing a panicking Mehdi Abeid to pass back to an equally harrased Tim Krul. Newcastle United´s dutch goal keeper could only slice the ball to leave Ashley Young free on the left post and an empty net to put the ball into. Young enjoyed that moment, he´d every right to as well. Reds in St James Park, who were so high up in the ground that they merely had to whisper to the Lord for divine intervention had their prayers answered. United fans went berserk, this was a crucial goal in a round of fixtures where all of the other teams in contention for the top four had also won. A draw would not have been the end of the world but a win was important. 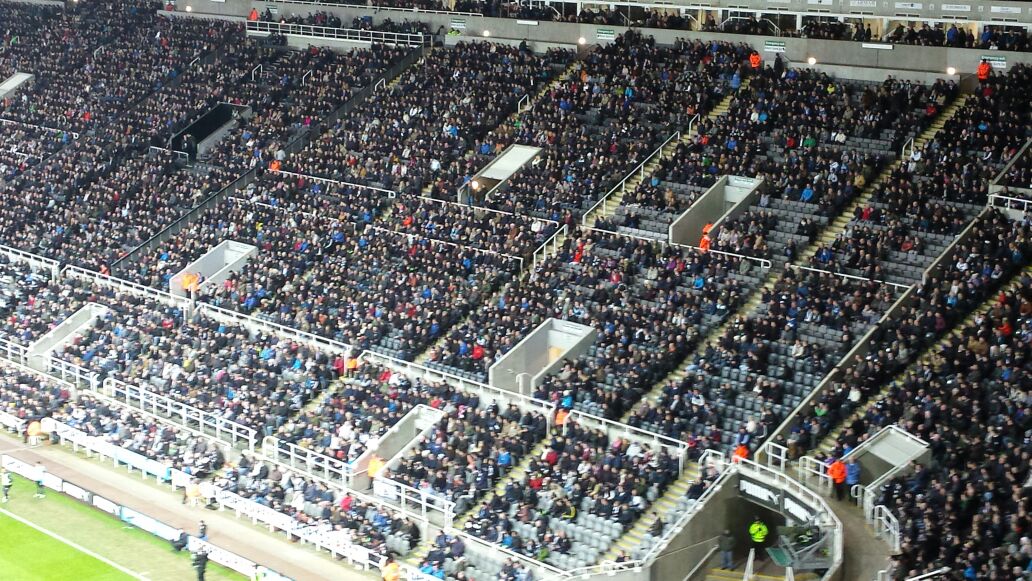 While watching United is akin to trying to open a tin of corned beef without the key, this team have still only lost twice in the last twenty matches in a season which everybody with a brain knows is a transitional one. While it feels like an eighteen month pregancy, it is still very gratifying to see how vexed everybody else gets when United win (the time to really worry is when they don´t). Steve McNicnackpaddywackerman was crying like a Geordie on television about how United can’t keep on playing like this and winning games. The boyhood Evertonian obviously doesn’t remember Bob Paisley´s Liverpool sides grinding out results like this (I certainly do). Hilarity ensued on the streets surrounding St James Park and in Newcastle Central rail station after the match. Joyous reds serenaded Alan Shearer as Geordie tears fell like rain and flooded the train. The self proclaimed loyalest (sic) supporters the world has ever had, took this bad, took this real bad, bonny lad. Unlike the 5-0 win Newcastle recorded aginst United nearly twenty years ago, a win which I´ve been told is actually embeded on Newcastle United´s honours list and a win which lead to Andy Walsh´s brilliant quote on Radio 5 about Newcastle having more false dawns than the zulus, it´s unlikely you´ll be able to buy a DVD of this match from anybody at Newcastle.

Any excuse to show this again, Oh what a night…

This win occurred on the Nineteenth anniversary of United stealing a win at St James´s to start off a sequence of events that had grown men who collectively looked like a giant barcode crying into their broon ale and discovering a penchant for punching horses. This great depression arguably reached its nadir in 2013 when Sting released an album of himself singing Geordie folk songs (tell me it can´t get any worse, can it?). That wonderful night in 1996,  Eric Cantona, the devil incarnate to most other people, to us, our racist bashing leader, scored the goal which lead to a glorious title win and an equally famous and notorious meltdown from Newa´stle. The like of which has never been seen since (although some have come close admittedly, eg United in 2012, Liverpool in 2014)

“If you’re not careful, I’ll take my scarf off to shoo you away.” https://t.co/wvoeHvjQJL

United are now aggressively trying to sell season tickets for next season. Three weeks ago, I got a phone call from the ticket office offering me the chance to enter a prize draw to win an Angel di Maria action man if I renewed there and then. I declined. On Monday, I got a glossy package enticing me to renew and pay for a season ticket now, a season ticket that actually isn’t due for renewal until the end of May. I wonder what it could be that´s stopping United fans from giving the best part of a grand two months early so that the club can have the interest on it. It’s similar to a scheme City used to do where the earlier you paid for your season ticket, the cheaper it would be. This was because in those days, as City fans never tired of telling us, Manchester City ‘respected’ their fans. Things have changed now of course. Gone are the days when innocent passers by would be kidnapped by City stewards on Claremont Road and dragged into the Maine Road. They would come out of the ground irreversibly changed, with a thousand yard stare and taking a silence that would impress a Tibetan Monk. They would communicate that they would never watch a game of football ever again but happily, that vow was rescinded in 2008 when they were filmed on SKY Sports News with tea towels wrapped around their heads after the club had been bought by “them arabs” (© City fans). City don’t do the early bird offer anymore but not to worry, United do with just an ever so slight difference. If you renew your season ticket for Old Trafford early, you get the precise total of nowt, tittota, nada, rien, nichts, fuck all knocked off the total price (this is for United’s multi-national and multi lingual support). Great. Sorry I didn´t do it sooner,  where do I sign up? Is the di Maria action man still available?

No police horses were harmed in the making of this blog