In the wider world, Margaret Thatcher’s government were continuing their vendetta against football fans. One of these ideas was to make every football supporter carry membership cards for the club they were affiliated too when attending matches. It was around this time that United introduced their own shitty membership scheme, the benefits which included 10p off a pencil rubber in the newly fangled superstore for the commencement of the 87/88 campaign. One of the most controversial measures of this scheme was making the Stretford End terrace members only, where the Stretford Paddock was fine for anybody who wanted to attend. This resulted in a lot of refuseniks (this writer included) moving over to the Paddock and it’s also this writer’s opinion that the Stretford End was never quite the same after this. END_OF_DOCUMENT_TOKEN_TO_BE_REPLACED

“Busted flush”, “Jose hates Manchester and is miserable”, “City are going to romp the league”, “it’s our year”, which came ad-nauseum from the scousers and this, was all before bells of October tolled for Manchester United. We were finished, an empire crumbling with all the drama of Rome in 476AD and writing this just before Christmas, it has to be admitted that United have had some disappointing results since August. Drawing at home to Stoke City, Burnley and conceding stupid late equalisers against Arsenal and Everton END_OF_DOCUMENT_TOKEN_TO_BE_REPLACED

Bournemouth fans however were a different breed altogether – somehow blaming fanzine and swag sellers for the game being postponed. I suppose it’s the kind of reaction you could expect from a load of Tory-voting Southern mard arses. One great thing to have come out of Sunday’s postponement is that this lot will have had two 500 mile round journeys in the last 72 hours. Fantastic. END_OF_DOCUMENT_TOKEN_TO_BE_REPLACED

Another player joining Nani in Kadiköy is Robin van Persie, who has left United after three seasons. He came to Old Trafford having turned down a better offer from Manchester City (quelle surprise), and END_OF_DOCUMENT_TOKEN_TO_BE_REPLACED

At the final whistle tonight there was no happiness, no relief or any feeling of job done. The feeling around me in the south stand/B stand of Old Trafford was that Sir Alex Ferguson got away with this by the skin of his teeth. In regards to his team selection, It’s one thing taking Crystal Palace in the League Cup lightly, taking a struggling Blackburn Rovers side for mugs on New Years Eve just gone but it’s another thing altogether taking a team who are their national champions and a club who’ve been European champions four times. The recent form of Ajax, since the resumption of the Eredivisie from it’s mid winter break has been lamentable. They did though give United a moment or two last week in the Amsterdam Arena to show that they were not going to despatched easily, even if United won 2-0 on the night, with a now priceless goal from Javier Hernandez, five minutes from time.

Five minutes into tonight’s game, Hernandez scored again to put United in an apparently unassailable 3-0 aggregate lead. Ajax, urged on by a noisy travelling support deservedly equalised with a low shot from Aras Ozbiliz on 37 minutes. On 86 minutes of a predominantly quiet and anxious second half, Toby Alderweireld put Ajax in front on the night and ensured a twitchy last few minutes at Old Trafford. The strange thing after Ajax scored was there was no urgency to their play. I got the feeling from the Ajax team that they thought there was 20 minutes left.

Sir Alex Ferguson admitted in his post match interview that he got his team selection wrong. He stated that the defence wasn’t strong enough. I respect that opinion but I can only recall one occasion where United’s defence were caught out badly and that was on Ajax’s second goal. The much criticised David De Gea pulled off at least two world class and with hindsight, tie winning saves.

Before the match, there were rumours flying around with the same vigour that the Police helicopter was hovering, about shenanigans involving Ajax fans. There were all kinds of brave random attacks on office workers and shoppers and the coup-de-grace was them smashing up the Binary Bar on Arundel street in Hulme. This is the kind of place used by residents of the adjoining flats and not the place where they’d find any of United’s more lively fans. Ajax fans in the ground tonight impressed with their noise and fervour, their shithouse behaviour around the town and it’s immediate suburbs reminded me of the time Leeds United fans terrorised a load of pensioners on Bournemouth beach in May 1990. Ajax are a club who’ve provided some of the most enjoyable teams the world’s ever seen play football. From what I’ve seen and heard in the last week, their fans are the very antithesis of the team they watch. I think the next time they get drawn against United in a European game, like Roma in 2007, they’ll get a very warm reception in Manchester. 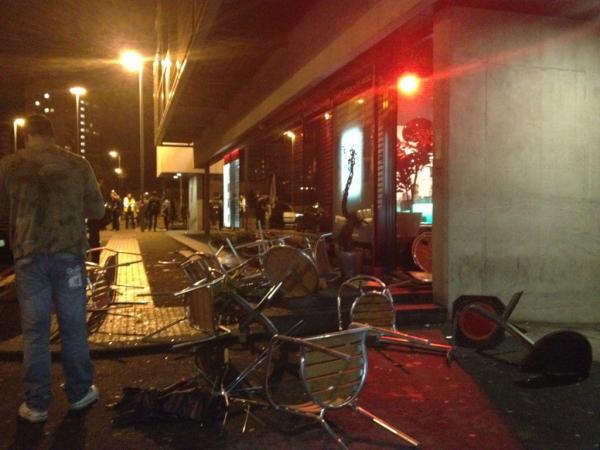 Ajax leave a bad stain on the Binary bar in Hulme